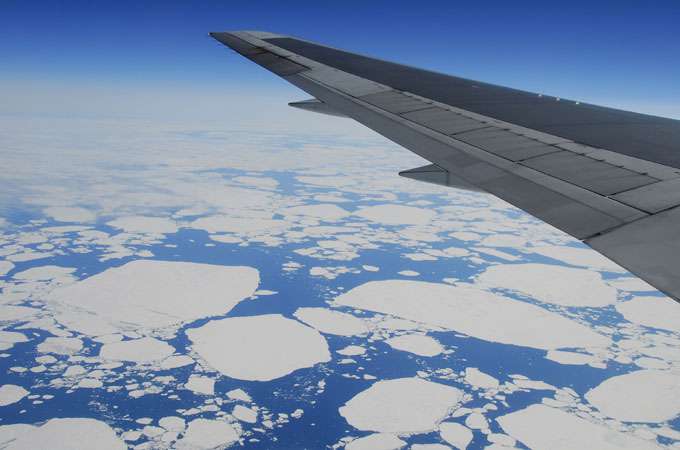 The Arctic is heating up faster than lower-latitude regions, and the biggest source of local pollution is airplanes. In a study published in Climatic Change, researchers propose a drastic solution: rerouting cross-polar flights around the Arctic Circle. This strategy could delay melting of Arctic sea ice, which is expected to vanish within the next few decades.

Cross-polar flights have grown increasingly common since the late 1990s, and the number will probably continue to rise along with tourism and international trade. The Arctic Circle is more sensitive to aircraft emissions than lower-latitude areas, partly because planes tend to fly through the stratosphere, a stable atmospheric layer that holds pollutants (such as black carbon, which absorbs sunlight directly and heats up the air) for a long time. If Arctic sea ice disappears completely, the loss could kick off accelerated warming for the entire planet.

Mark Jacobson, an atmospheric scientist at Stanford University in California, and his colleagues wondered whether this tipping point could be staved off with some creative travel rearrangements. The team examined emissions from 40,399 cross-polar flights made in 2006. Next, the researchers simulated what would happen over 22 years if flights were rerouted around the Arctic Circle instead.

The rerouted flights ended up using more fuel, increasing the world’s average fuel use for commercial planes by 0.056 percent. But the world’s overall surface temperature still dropped by about 0.015 degrees Celsius, partly because the planes were dumping emissions at lower latitudes—where stormy weather tended to quickly wash pollutants such as black carbon out of the atmosphere. Thickness of the Arctic’s sea ice increased as well, the team reports.

The cost of operating and fueling these flights would go up by about $99 million per year. But the costs of global warming–related damage in the U.S. by 2025 would also decrease by about $4.7 to $5.4 billion per year, the authors estimate. And the rerouting wouldn’t have to be permanent: the strategy could buy society time to switch to environmentally friendlier planes that can cross the Arctic guilt-free. ❧