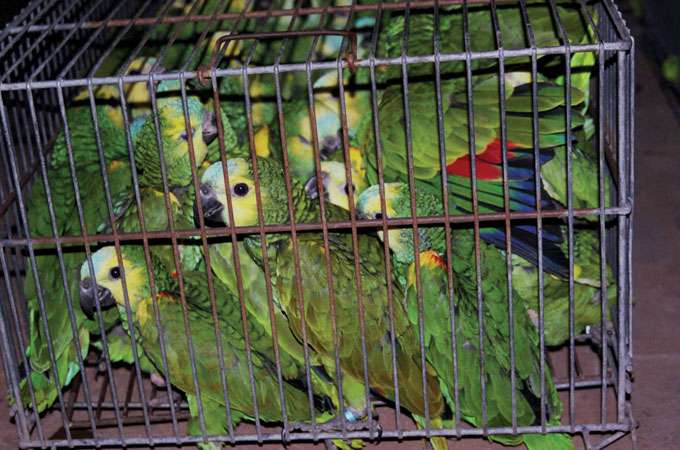 Along with drugs and weapons, wildlife is one of the world’s biggest sources of illegal trade. Now researchers in Brazil have put some numbers to the problem, finding that tens of thousands of birds are sold illegally each year in just one metropolitan area’s street markets.

Illegal trade can affect biodiversity and drive some species close to extinction. According to some estimates, people hunt or trade more than 400 threatened bird species. But exactly how many animals are traded—and for how much money—is hard to determine.

To investigate, researcher Rodrigo Farias Silva Regueira of the Universidade Federal de Pernambuco visited ten street markets in Recife, a metropolitan area in northeastern Brazil, and pretended to be a potential buyer. Using a pen camera hidden in his shirt collar, he recorded images of wild birds for sale.

The researchers saw 2,130 birds from more than 50 species, including yellow-bellied seedeaters, saffron finches, and red-cowled cardinals. Eighty-two percent of the birds appeared stressed, usually because they were kept in crowded cages or roughly handled by vendors. These markets likely sell about 40,000 birds per year for an average total value of about $505,000, the team estimates in Biological Conservation.

Since many animals probably die before being sold, the number of birds captured from the wild could be much higher, the authors say. “Such sites are real biodiversity sinks,” they write, “and both society and authorities are underestimating the mid- and long-term damage those sites are causing.” ❧