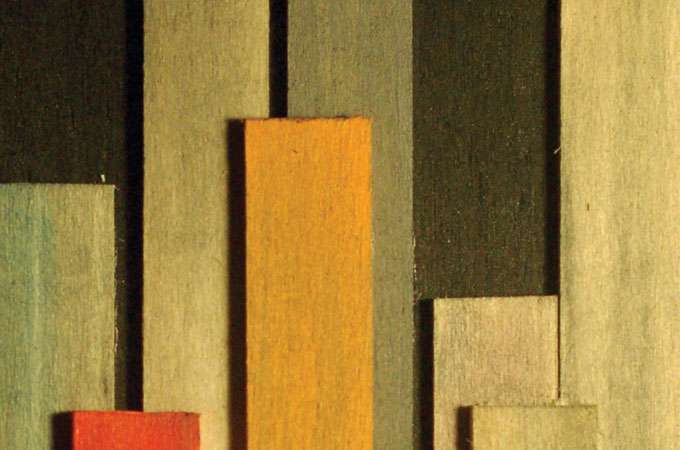 Just over a century ago, the architects and engineers who invented the skyscraper set us on the path to becoming an urban world. Tall buildings of concrete and steel helped make urban density—and the increased sustainability that comes with it—possible.

But the buildings themselves come at a heavy, and often hidden, environmental price. Concrete and steel are some of the most energy-intensive materials on the planet. The manufacture and transport of concrete, for example, is responsible for about five percent of global CO2 emissions, more than the entire airline industry.

“When we talk about sustainability of buildings, we’re really tinkering around with the little minutiae”—a green roof here, a solar panel there, says Michael Green, an architect in Vancouver, Canada. “Those things are good, but they’re not even close to good enough.”

Green thinks that in order to build the sustainable cities of the future, we need to look back to the log cabin era. That is, we should be building skyscrapers out of wood. His design concept for a “woodscraper” is based on mass timber, a class of wood products that come in panels up to 64 feet long and eight feet wide. These materials, with names such as cross-laminated timber, laminated strand lumber, and laminated veneer lumber, look similar to plywood but are thicker and much stronger.

Depending on the specifics of the design and materials used, mass-timber towers could be built at least 30 stories high. They wouldn’t be the world’s tallest buildings, but “we’re talking about the kinds of buildings where most people will live,” Green says. These kinds of buildings could perhaps accommodate the planet’s nearly 2 billion new urban dwellers expected over the next 20 years.

The structures would reduce carbon emissions associated with construction in several ways. First, it takes less energy to produce wood products than to produce steel or concrete. As a renewable resource, forests absorb carbon while growing. And the buildings themselves store large amounts of carbon in the form of wood. A 30-story tower might store around 600 metric tons of CO2, the equivalent of the annual emissions from 118 passenger cars. In essence, Green’s plan would turn a city’s very infrastructure into a carbon sink.

Life-cycle analyses comparing the climate impacts of different building materials support Green’s argument, says Ken Skog, a forestry researcher with the USDA Forest Service’s Forest Products Laboratory in Madison, Wisconsin. “Generally the finding has been that if you use wood materials in buildings, you obtain a benefit” over concrete and steel, he says.

But carbon storage in wood products is often less impressive than it first seems, once the entire life cycle of a product is taken into account, notes Ann Ingerson, a Vermont-based economist with The Wilderness Society. “To know whether it actually helps the climate, you’d need to do the accounting, both for the processing chain and in the woods,” Ingerson says. For example, she has found that wood products often get thrown away prematurely, releasing their carbon back into the atmosphere.

Green’s answer is to make tall wood reusable. He compares the large, mass-timber panels that would make up his wooden towers to Lego bricks that can be put together, taken apart, and rearranged—rather than winding up in a landfill at the end of a building’s life. This would ensure that the carbon stored in the panels is truly sequestered for the long term.

Few life-cycle analyses of wood in construction have addressed mass-timber products; most focus on light wood framing, the type of construction used in single-family homes. One recent study, however, by a master’s student at the University of British Columbia, compared construction of a mid-rise office building with concrete to construction with cross-laminated timber and found that the mass-timber building had a 71 percent lower global-warming potential than the concrete version. 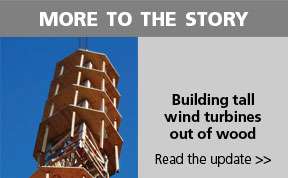 Green is quick to add the caution that mass-timber skyscrapers will have environmental benefits only if they’re built of wood from sustainably managed forests. But he says that in some areas of the developing world, increased demand for mass-timber products could actually improve forestry practices by creating an economic incentive for replanting trees—another climate benefit.

To skeptics who question whether wood products can live up to modern fire and earthquake building codes, Green offers a 240-page report that contains detailed technical drawings of his open-source concept. He describes, for example, how in a fire mass-timber panels develop a thin char layer which protects the wood underneath from igniting. And in buildings taller than ten stories, he would add steel cross-beams to provide earthquake and wind resistance.

In fact, there are precedents for tall wooden buildings around the world. Japan has 19-story wooden pagodas that have stood for 1,400 years. More recently, several environmentally minded architects have taken up the challenge of building big with wood. The Stadthaus, a nine-story London apartment building made of cross-laminated timber, was completed in 2009. In Austria, a 30-story building made of concrete slabs and mass-timber framing has been proposed.

Green, who hopes to secure an agreement later this year to build the first prototype of his design in Vancouver, sees himself as carrying on the tradition of those first audacious skyscraper builders. “The major innovation in city building a century ago came from the competitive spirit to build tall,” he says. But, oddly enough for a high-rise designer, he adds, “I don’t really care about tall buildings.” Instead, what he really wants to inspire is a competition to build green. ❧