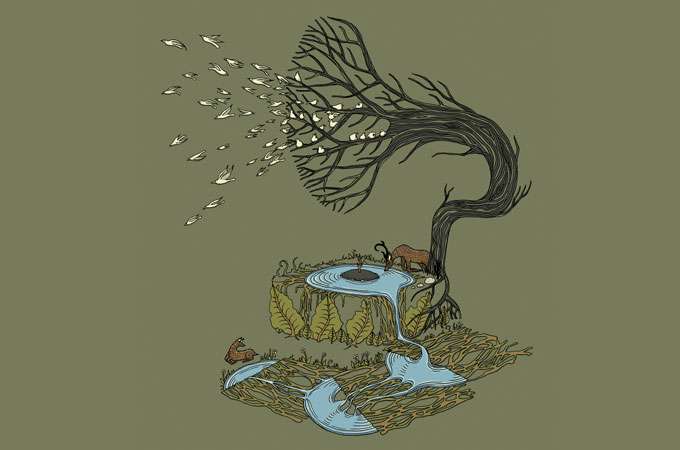 The Lost Art of Listening

A review of The Great Animal Orchestra

All it takes to become hooked on birding is one look through a good pair of binoculars. A mountain bluebird is lovely to behold with the naked eye, but once you’ve seen a breeding male in all its 10x magnificence, you’ll know why it’s called the bluebird of happiness.

Bernie Krause has experienced the same eye-opening thrill, but with sound. The way he describes what he hears through his recording equipment will make you want to put on a pair of headphones and sit in the forest for a day, tethered to a microphone. That’s what Krause first did in the fall of 1968, when he switched on his portable recorder in Muir Woods, a grove of coastal redwoods north of San Francisco:

The ambience was transformed into minute detail that I would have never caught with my ears alone—the sounds of my breathing; the slight movement of a foot adjusted into a more comfortable position; a sniffle; a bird landing nearby on the ground, stirring up leaves and then pushing air with its wing beats in short, quick puffs as it took off, alarmed.

I realized, even then, that wild sound might contain huge stores of valuable information just waiting to be unraveled. But to that point in my life, I’d had no way of understanding that the natural world was filled with so much wondrous chatter. 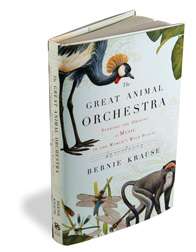 It was a life-altering moment for Krause, who had been commissioned to do an album incorporating long segments of wild sound. At the time, he was a professional musician who had worked as a guitarist (including a gig as the replacement for Pete Seeger in The Weavers) and later as a producer who introduced the synthesizer to pop music and film. But after his awakening in the woods, the 40-year-old Krause quit the music business and enrolled in graduate school to study bioacoustics. He didn’t leave the world of music behind, though. Instead, this pioneer of synthetic sound found his true music in natural sounds.

When Krause first visited Muir Woods, whole-habitat recordings were virtually unheard of. Instead, field recordings focused on the vocalizations of solo animals and attempted to isolate these sounds from their surroundings. But Krause followed the lead of Simon Fraser University acoustics expert R. Murray Schafer, recording what Schafer calls “soundscapes”—all the sounds generated at a particular time and place.

Eventually, Krause recorded more than 4,500 hours in remote natural settings around the world. During these expeditions and the countless hours he spent listening to the recordings back in his studio, he had one epiphany after another.

While most ecologists assumed that natural sound was chaotic and random, Krause saw patterns similar to musical scores. By the late 1980s, he had come to the conclusion that animals evolved to vocalize in relation to one other, like the instruments in an orchestra, filling different ecological niches in frequency and time. Each species stakes out its own acoustic turf, just as violins and trumpets have distinctive sounds.

Krause’s most memorable music lesson came from a Nez Percé elder who showed him a cluster of reeds that sounded “like a cross between a church organ and a colossal pan flute” when wind blew across the reeds’ open tops. “Now you know where we got our music,” the elder told Krause. “And that’s where you got yours, too.” Krause muses over the irony of writing a book about “something that our ancestors knew intuitively—something that would have been a fundamental part of the fabric of their lives and that needed no explanation.”

In the modern world, however, we require high-tech listening devices to detect subtle changes in habitats. For example, a recording that Krause made at a mountain meadow in the summer of 1988 shows a dense soundscape. Exactly one year later, after a lumber company had selectively logged the meadow, Krause returned and saw little difference. But the moment he donned his headphones, he realized that the density and diversity of species had declined dramatically.

Surprisingly, Krause has little to say in his book about the field of “soundscape ecology,” perhaps because it is so new. The National Science Foundation recently awarded $500,000 to a team led by Bryan Pijanowski, a forestry and natural resources professor at Purdue University, to launch the Global Sustainable Soundscape Network. The network will collect long-term acoustic data and study the feasibility of using it to help detect pollution, climate changes, and other environmental impacts.

This idea is not entirely new. Since the publication of Rachel Carson’s Silent Spring in 1962, scientists have known that sounds provide important clues about environmental health. And it is no secret that the human din has grown so loud that it is disturbing even to members of our own species. Recording a noise-free hour of material today takes Krause more than 200 times as long as it did when he first began his work 40 years ago.

Krause’s solution is that humans must rediscover, as he did in Muir Woods, a part of the world that our culture has largely forsaken. We have forgotten how to listen to—much less interpret—the call of the wild.❧

Dawn Stover is a freelance science and environmental writer based in White Salmon, Washington. She is a contributing editor at Popular Science magazine and at the Bulletin of the Atomic Scientists.