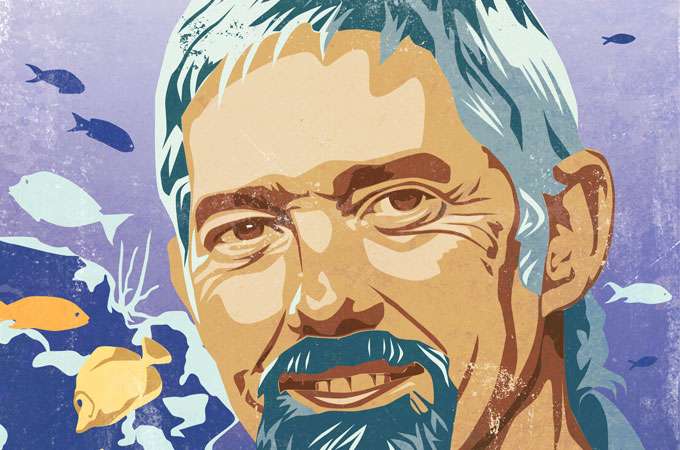 Agent for the Resistance

Around the world, warming seas are turning massive coral reefs into bone-white ghost towns. When the water gets too warm, stressed corals often respond by expelling the symbiotic algae, or zooxantehellae, that live within their tissues. The algae provide the coral with nutrients—and with color, causing the corals to “bleach” when they evict their guests. But around the tiny Pacific island of Ofu—a part of American Samoa—reefs appear to be resisting mass bleaching, even thriving despite warming waters. Stephen Palumbi, the director of Stanford University’s Hopkins Marine Station, has been studying Ofu’s “super reefs” for years now, trying to understand what makes them tick. And earlier this year, he and his colleagues launched a sweeping search for other heat-resistant corals around the Pacific. The expedition came just as a different research team published a study showing that other corals appear to be joining the resistance. In some unexpected good news, they reported in the journal PLoS ONE that reefs off Singapore and Malaysia had withstood a severe 2010 bleaching event, offering hope that some corals will be able to adapt to a changing climate.

What does a mass bleaching look like?
Imagine walking into a gigantic flower store where every single flower is dead and crumpled over. The flowers—the corals—are so glaringly white that they have an eerie glow, and they stretch for as far as you can see. That’s what it looks like.

Are the waters around Ofu warm enough to do that kind of damage?
Absolutely. We started our search for the world’s strongest corals at Ofu because the backreef lagoons were too hot for corals to grow well—supposedly. The corals there should have bleached a long time ago; in fact, they were growing faster than the same species do elsewhere. It’s as if they had never read the literature and didn’t know they were supposed to be dead.

So, what is keeping these reefs healthy?
We have some working theories. One of them has to do with the fact that the temperatures of the tidal pools on Ofu seem to rise and fall back to safe fairly frequently, which may help the reefs adjust to the warming. There’s also a heat-resistant algae that’s been found inside some of the corals.

Is Ofu the only place where resistant “super corals” are found?
It’s the only place we know of. But in March, we started a search for more of the world’s strongest corals. Our first stop was American Samoa, and from there we went to Rarotonga in the Cook Islands, a place where normal ocean temperatures are lower than in American Samoa. The final stop was the “almost-atoll” of Aitutaki, a small island north of Rarotonga. At each stop, we tested corals using a stress tank—a computer-controlled aquarium that lets us heat seawater to a precise degree. We placed corals from different reef locations into these tanks, ramped the temperature up over the course of a day, and recorded which of the corals bleached. It’s helping us figure out where the tough corals live and, ideally, find ways of protecting them.

What about taking more radical steps, like seeding other coral reefs with heat-resistant zooxantehellae or genetically engineered corals?
Perhaps. But there’s tremendous resistance in the coral community to these kinds of proposals because the risk of unintended consequences is so high. For example, “artificial” coral algae are usually cultured with all kinds of bacteria, and we don’t know what will happen if we spew that mix into a natural reef. We know even less about the side effects of introducing genetically engineered organisms into wild ecosystems. ❧