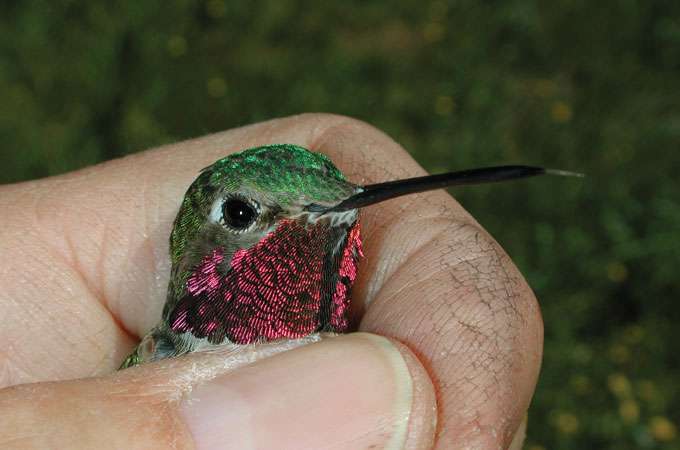 Hummingbirds and lilies are out of sync

Every summer, hummingbirds feast on the nectar of glacier lilies at breeding grounds in Colorado. But as the climate warms, lilies and other flowers are blooming earlier, scientists have found. Within several decades, the overlap between the flowering time and the hummingbirds’ nesting period could shrink enough to endanger the birds’ reproduction.

The researchers studied the broad-tailed hummingbird (Selasphorus platycercus), which departs Mexico and Guatemala each spring for breeding grounds stretching from Arizona to Montana. During migration and nesting, the birds rely on flower nectar for nourishment.

The study drew on decades of data on hummingbird arrival and flowering times in Arizona and Colorado, stretching as far back as the mid-1970s. At the Arizona sites, the flowering schedule of Santa Catalina paintbrush and ocotillo, two sources of nectar for hummingbirds, didn’t change much. But in Colorado, the first flowering of glacier lilies and dwarf larkspurs crept 4.6 and 4.3 days earlier, respectively, per decade. Hummingbirds also arrived earlier, but only by 1.5 days per decade, the team reports in Ecology.

Usually, hummingbirds reach the breeding grounds before lilies and larkspur start blooming. By 2033, if the current trend continues at the same rate, the birds may arrive after the lilies’ average first-flowering date and by 2069 after larkspur’s. As a result, hummingbirds will risk running out of nectar as they raise their chicks, says coauthor Amy McKinney, an ecologist at the University of Maryland in College Park. This year, the team saw the most drastic mismatch yet: hummingbirds didn’t reach the breeding grounds until 10 days after the glacier lilies’ first bloom. ❧