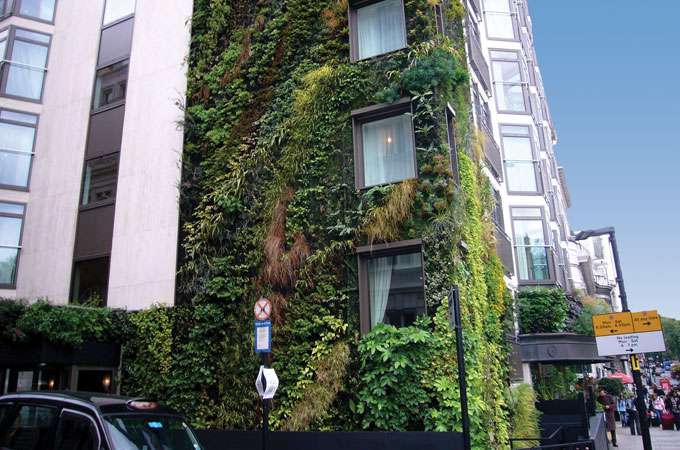 Planting trees isn’t always the best way to reduce air pollution on city streets, a new study says. In some cases, more trees could even make the problem worse. Instead, “green walls”—blanketing sides of buildings with grass, ivy, or other plants—might be the most effective solution.

In the U.K., 35,000 to 50,000 people die annually from pollution-related causes. Adding plants to city streets can reduce pollutant levels, but researchers have estimated the effect is small.

In a new study, a team took a closer look at a common feature of the urban landscape: the street canyon. Street canyons are roads surrounded by tall buildings, where air tends to linger.

The researchers ran computer simulations to determine how green walls and roofs might affect pollutant concentrations at street level. Adding plants to walls would cut nitrogen dioxide levels by 15 percent and small particulate matter by 23 percent, the authors estimate. In areas with little wind, those numbers could reach 40 and 60 percent. Green roofs didn’t perform as well because they don’t directly affect the air near the street.

Trees also help clean the air, but they can keep street-level air from mixing with the air above. At low-to-medium pollutant levels, planting trees will still reduce air pollution, the team predicts. If a city is very polluted, however, trees could actually increase nitrogen dioxide levels near the street. “By not considering the adverse effects of tree planting on canyon ventilation, urban greening initiatives that concentrate on increasing the number of urban trees, without consideration of location, risk actively worsening street-level air quality,” the authors warn. ❧