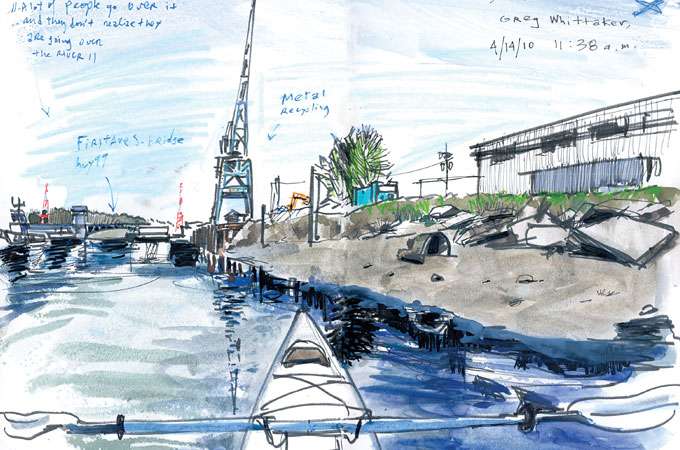 A restoration plan with an eco-industrial vision

One summer afternoon I bobbed on the waters of a river with an Indian name, watching a kingfisher dive for fish. Osprey perched nearby, and a few feet from my kayak a salmon jumped with an impressive splash. Was I on the Sol Duc River in Olympic National Park, perhaps, or deep in the coastal rainforest of British Columbia? No. I was in the heart of Seattle, Washington, on a five-mile stretch of the Duwamish River lined with industrial operations and designated in 2001 as a Superfund site thanks to all the toxins in the mud. From my yellow boat I could see the Space Needle and skyline, as well as Boeing’s famous Plant Two, where a dozen B-17 bombers were built every day during World War II.

The Duwamish River is a mess, but the wildlife that frequents it shows that it has promise. What’s interesting is the vision its supporters have for it. None of them are talking about restoring it to the way it was when Europeans first settled in Seattle in the 1850s. None of them are pushing for it to be made into a park. Instead, they see a hybrid future for the Duwamish—part habitat, part active industrial waterway.

Plant Two’s windows glowed rosy in the setting sun, and from the water I could see how the massive building extended out over the river on pilings. “All the oil and toxic chemicals involved leaked through the floorboards,” said Cari Simson, a staffer at the Duwamish River Cleanup Coalition, who balanced in her own kayak as planes taking off from Sea-Tac Airport roared low overhead. “All this mud is filled with heavy metals.”

As part of the long process of the Superfund cleanup, Boeing has agreed to tear down Plant Two, seal off the portion of the river currently underneath and alongside it, pump out all the water, and then remove 100,000 cubic yards of toxic sediment. Eventually they plan to install salmon-friendly habitat, including gradually sloping banks and pocket side-channels to the river, which salmon can use as rest stops as they migrate up the river to spawn.

Simson will be pleased to see the change. But she doesn’t want every lot on the river to follow suit. The low-income neighborhoods on either side of the Duwamish could use the jobs that an active industrial waterway can provide. And so Simson and her colleagues want to have it both ways. The Duwamish River Cleanup Coalition has an “eco-industrial vision” for the river. It’s a tall order for a river mostly hidden behind defunct cement factories and huge Boeing buildings, a river currently lined with signs warning against consuming the river’s fish and shellfish—in English, Spanish, Chinese, Korean, Vietnamese, Cambodian, Laotian, and Russian, just to be safe.

But the entities that will have to clean up the river under the complex Superfund process, including the City of Seattle, the Port of Seattle, King County, and Boeing, share the hybrid vision for the river, or at least they claim to. Major cleanup actions won’t begin for a few years, and it remains an open question how clean the Duwamish will get.

In the meantime, as my short kayak trip up the Duwamish demonstrated, the seeds of this vision are already present between defunct operations rusting in the drizzle. Sure, much of the shoreline is a wild tangle of blackberries and butterfly bush growing on heavily contaminated muck, but there are also thriving businesses and restored sites, like the mouth of Hamm Creek—for many years better described as Hamm Pipe, a culvert that unceremoniously dumped into the river. Now the pipe is gone, and a “daylighted” creek softly flows into the Duwamish through a lacy scrim of reeds and grasses patrolled by herons. The vegetation that has been planted here feeds baby salmon and provides habitat for birds.

Downstream we floated by a cozily seedy marina where hip young artists live aboard their boats and past Delta Marine, a luxury yacht maker. Farther still, people waved to us from a series of tiny street-end parks that look out over the river.

Rewilding, assisted migration, and embracing some exotic species and novel ecosystems may seem like disparate strategies, but they are all at some level about making the most out of every scrap of land and water, no matter its condition. To make the most of our protected areas, we must think beyond their boundaries and complement our wildernesses with conservation everywhere else too, from industrial rivers like the Duwamish to the roofs of buildings and farmers’ fields.

Some optical illusions, like the illustration that can be a rabbit or a duck depending on how you look at it, rely on a gestalt switch. You see an image one way, unable to see the other possibility, and then suddenly your brain flips and sees it the other way. A protected-areas-only, pristine-wilderness-only view of conservation sees a globe with a few shrinking islands of nature on it. Nature is the foreground, human-dominated lands the background. The new view, after the gestalt switch, sees impervious surfaces—pavement, houses, malls where nothing can grow—as the foreground and everything else as the background nature.

This background nature comes in different flavors, to be sure, from vast fields of genetically identical corn to city parks to the last hectares of South America’s Atlantic Forest, where tiny golden lion tamarins swing from the trees. Not all this land is equally valuable to most conservation goals, but all of it can be improved. Those cornfields can grow strips of native plants on their edges; those city parks can provide food for migrating butterflies. Thus the project of conservation is not just defending what we have, but adding lands to our portfolio and deepening value of the lands in play.

Adding and deepening is already the bread and butter of many professional conservationists. Adding may seem impossible at first blush. Humans are always increasing in number and are likely to do so for another 190 years, according to the population experts at the United Nations. But more of us than ever are living in cities. In 2009 the world’s urban population overtook its rural population for the first time. And people who live in cities often have a smaller footprint than people who live in the country. Of the less than 2 percent of the ice-free land that is paved or covered in buildings, most is rural, where housing “tends to sprawl,” according to ecological geographer Erle Ellis.

Green planners have been fighting sprawl for decades in zoning board meetings and state development offices. Some argue that suburbs and exurbs will shrink once the price of gas reaches a certain level. Pavement isn’t necessarily forever. Subdivisions can be undivided—especially in a recession. Even in cities, the impervious can become pervious. When Boeing’s Plant Two comes down, one gigantic building will become five acres of wetland and half a mile of natural shoreline.

And then there is deepening—working the art of the possible to get more conservation value out of the other 98 percent of land. Much public land is already managed for “sustainable use,” and plenty of activists are toiling away trying to improve the rules and regulations of these arrangements to eke out more conservation value. Similarly, conservation ecologists work with private landowners to make their lands work for nature as well as for the owners, often with the help of tax incentives.

Protected areas like Yellowstone are not the wrong model, but a crucial part of an expanded model. Such strictly protected areas become anchors, with overlapping zones of various protection regimes and conservation goals radiating out from them, like petals from the center of a rose.

From my kayak, I could see tiny hidden green places along the river, places I’d never seen when barreling down Marginal Way or other nearby roads. A few days later I explored these tiny oases by car with Heather Trim of People for Puget Sound, an environmental group that until a few decades ago focused all their attention on preserving seemingly pristine areas but now fights to restore places such as these nubbins of waste space abutting the river. With such tiny footprints, I wondered how they could provide much conservation value. I learned that what they may lack in endangered species or, say, carbon sequestration ability, they more than make up for in recreation, aesthetic, and especially “peacefulness” values.

At the end of Duwamish Diagonal Avenue, hidden in a tangle of industrial access roads, is a small park with a picnic table. A lady in polar fleece feeds some Canada geese as a huge barge slides by on the Duwamish, loaded with at least one-hundred 48-foot cargo containers. She says she used to work nearby and comes here when she has a spare moment before her appointments at the Veterans Administration. A couple sits at the table, eating lunch after a shopping trip to the warehouse store, Costco. “We come here every time we go to Costco,” says the man. “It is a little place to get off the street.” “We saw seals here one time,” adds the woman. It is oddly quiet, and serene, here, apart from some kind of ringing noise from Selden construction and the low white noise of big boat engines.

Other street ends are even tinier and less well maintained. One features a wild prairie of weeds with a view of Mount Rainier. Another has recently been landscaped with native plants, and a woman smoking a cigarette watches a child play at the shoreline. “It is peaceful here,” she says. An employee of a metal recycling operation approaches Trim from his side of the chain-link fence separating the business from the street end as she tells me about the salmon-friendly features planned for the space now occupied by blackberry vines and a broken desk drawer. “Are there going to be trees here, and green grass?” he asks Trim, expectantly.

Emma Marris is a freelance writer based in Columbia, Missouri. She covers the environment, evolution, energy, agriculture, food, language, books, and film. Her stories have appeared in Conservation, Wired, Nature Medicine, OnEarth, and Nature, where she worked as a staffer for several years. Her first book, Rambunctious Garden: Saving Nature in a Post-Wild World (from which this essay is excerpted), was published by Bloomsbury in 2011.