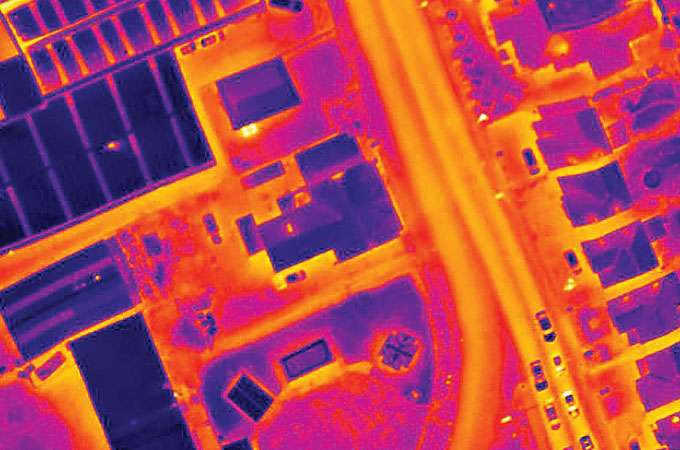 Roads and lots could double as water heaters

Pavement covers as much as 45 percent of urban areas—and asphalt makes a sizeable contribution to the urban heat-island effect. On a steamy summer day, the surface of a road may get as hot as 60 degrees Celsius (140 degrees Fahrenheit). And it can stay miserably hot long after the sun sets, raising the temperature of whole neighborhoods built around this blacktop.

A lot of work has gone into figuring out how to combat this effect: planting more tree cover, painting black surfaces white, even constructing artificial glaciers. But what if, instead of fighting it, we used that heat?

Rajib Mallick, a professor of civil and environmental engineering at the Worcester Polytechnic Institute in Massachusetts, and other researchers have been developing a system that would harness the heat contained in asphalt. In one of Mallick’s designs, asphalt would heat water coursing through a series of pipes embedded in the road. In large-scale experiments on pavement slabs embedded with copper pipes, the researchers found that they can cool pavement by as much as 10 degrees Celsius with this technique while extracting the equivalent amount of energy.

Putting miles of pipe underneath highways could be costly to construct and maintain. In order to capture the most energy, the pipes would have to be embedded as close to the asphalt surface as possible. So instead, Mallick has his sights set on buildings with vast parking lots—such as theaters, malls, or office complexes. All that hot water could do the laundry at a sizeable hotel.

In another configuration, a flexible, cloth-like material embedded in the road surface could conduct heat to pipes running down road medians. Alternatively, the heat could be converted into different forms of energy. Liquids other than water and which vaporize at temperatures as low as 30 degrees Celsius could be used to drive turbines generating electricity.

Mallick and his colleagues have begun testing their designs with support from both the state of Massachusetts and the National Science Foundation. ❧

An earlier version of this story appeared at theatlanticcities.com.