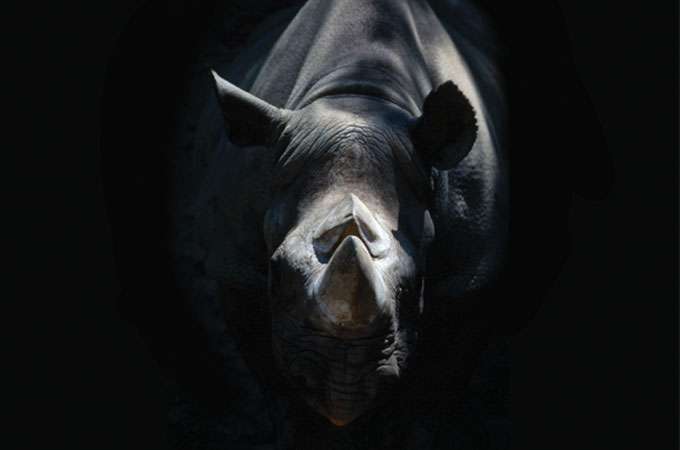 When poachers approach the Rhino and Lion Nature Reserve near Johannesburg, South Africa, they quickly learn that they won’t find anything of value there. Yes, the reserve is home to rhinoceroses, whose horns fetch top dollar—up to twice the price of gold—for use in traditional Asian medicine, but signs surrounding the park tell poachers that anyone taking “medicine” made from the horns is likely to get sick, not healthy. (Rhino horns, made of keratin, have no actual medicinal value.)

Ed Hern, owner of the reserve, has always hired armed guards to protect his rhinos, but even that didn’t work. Out of desperation, Hern proposed injecting his remaining rhinos’ horns with deadly cyanide.

Thinking that was going a little too far, Hern and his staff came upon a less fatal alternative. They started infusing their rhinos’ horns with a veterinary drug cocktail including an anti-tick parasiticide that’s not lethal to humans but can cause nausea, convulsions, and even nervous disorders. The rhinos’ health is not affected because there are no veins in the animals’ horns.

Two additional steps taken during the infusion process are intended to further deter poaching. First, the horns are injected with an indelible dye similar to the one used by banks to mark bills in case of robberies. The dye doesn’t change the horns’ outward appearance but does show up on airport scanners. Second, GPS microchips are installed in the horns to help track them.

Hern isn’t the only one using this new process. He has founded an organization, the Rhino Rescue Project, to bring the patent-pending idea to other reserves, which often invite nearby villagers to view the infusions. This is one more step in the process of saving the rhinos: convincing the public—and poachers—that living rhinos have value so that the animals won’t be killed in the first place.

Although protecting these animals is a worthy goal, some experts question the poisoning option. “Aside from the risk of harming the very animals you’re trying to protect through injecting them with poison, there’s an important human ethical consideration here: that of further victimizing sick individuals suffering from cancer who have already been hoodwinked by the unscrupulous dealers who sold them the ineffective ‘cure’ for their illness in the first place,” said Tom Milliken, Elephant and Rhino Program Leader with the wildlife trade–monitoring network TRAFFIC. But desperate reserve owners still wonder: Is this the cost of yanking the bottom out of the rhino-horn market? ❧