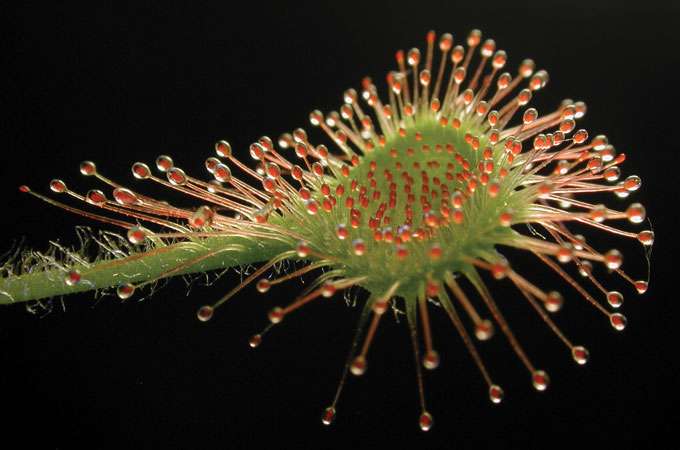 In highly polluted areas, some carnivorous plants rely less on insects for sustenance, scientists have found. Instead, these normally voracious bug-eaters soak up more nutrients through their roots.

Cars and factories release nitrogen pollutants into the atmosphere, which then rain back down on Earth. Plants use these chemicals essentially as fertilizer. Jon Millett, a plant ecologist at Loughborough University in the U.K., wondered how this environmental change might affect the diets of carnivorous plants—which can get nutrients both through their roots and by eating insects.

He focused on the species Drosera rotundifolia, a plant with small, round leaves. Each leaf sports red stalks with drops of sticky fluid on the ends. When a bug gets trapped on the tip of a stalk, the leaf slowly rolls over to cover the unlucky insect “like a taco,” says Millett.

Millett collected samples of D. rotundifolia from three bogs in Sweden, each with a different level of nitrogen pollution. He also collected insects and moss in the area.

To determine how the carnivorous plant obtained its nutrients, the team studied the nitrogen content of D. rotundifolia, the moss, and the insects. Nitrogen has two stable forms, one heavier than the other. Organisms higher on the food chain tend to carry more of the heavier form. By comparing the nitrogen signatures of the three types of organisms, the researchers could estimate how much nitrogen D. rotundifolia obtained through its roots—as the moss did—or from eating bugs.

D. rotundifolia from the least polluted bog got more than half its nitrogen from insects, while those in more polluted areas got only about 20 to 30 percent from insects, the team reports in New Phytologist. Since the plants in polluted bogs can get plenty of nitrogen through their roots, they may not bother spending the energy to maintain their traps. Millett suspects those plants may be making their stalks less sticky to reduce their insect intake. ❧