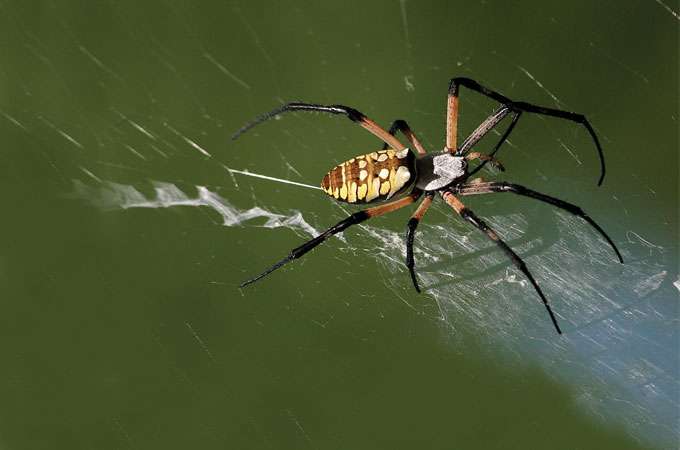 Each day, more than 250,000 birds in Europe die from collisions with glass windows—and annual estimates in the U.S. run into the millions. Birds either don’t see the glass, or they see reflections—of trees, for example—in the glass that make them fly into it.

In an attempt to reduce the number of fatal bird strikes, the German company Arnold Glas developed a new kind of insulated glass with a patterned UV coating that mimics how spiders keep birds from flying into their webs. The special reflective coating appears almost transparent to humans but is clearly visible to birds because they can see UV light.

This patterned glass, called Ornilux, is inspired by orb weaver spiders (Araneidae), one of the largest families of spiders. Orb weavers build the classic flat web: concentric circles with spokes radiating out from the center. Some species also incorporate UV-reflective silk strands into their webs, creating so-called decorations to attract insects and to distract or warn larger animals, including birds. This helps prevent the destruction of the spider’s web and its temporary loss of ability to capture prey.

Independent field testing by Dr. Hans-Willy Ley from the Max Planck Institute for Ornithology showed that 76 percent of birds avoided the Ornilux panel and instead flew toward the conventional glass panel.

Ornilux is currently being used in buildings and wildlife exhibits around the world, including a Wildlife Conservation Society conference room at the Bronx Zoo; the Tracy Aviary in Salt Lake City, Utah; and the polar bear exhibit and pelican house at the Hellabrunn Zoo in Munich, Germany. ❧