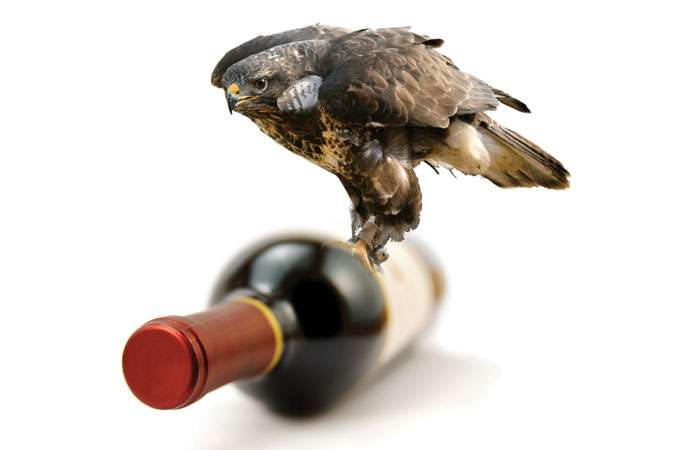 New Zealand falcons have helped winemakers by hunting birds that damage grapes. Now a new study has shown that the arrangement also benefits the falcons: these raptors take better care of their chicks when they live in vineyards.

The expansion of vineyards in the country’s Marlborough region has driven out the New Zealand falcon (Falco novaeseelandiae), which is now threatened. A program called Falcons for Grapes, started in 2005, brought the birds back to wine country. Previous research found that the falcons helped control pests such as starlings and blackbirds in vineyards, but “whether there is a simultaneous benefit to the falcon population is, as yet, unknown,” the authors write.

To find out how the falcons were faring, researchers set up video cameras near four nests in or near vineyards and near six nests in the hills. The team monitored the birds and their chicks from 2008 to 2011, gathering more than 2,800 hours of recordings.

Vineyard falcons spend more time feeding their chicks and guarding their nests, the authors report in PLoS ONE. As the chicks grew, the falcons in vineyards also provided more food than the falcons in the hills. And the vineyard-dwelling falcons did a better job of preparing the chicks’ meals: they plucked all the prey’s feathers and decapitated prey more frequently.

The falcons in vineyards had an automatic advantage because they received supplementary food. But even when the researchers didn’t count the extra food, they found that the vineyard falcons tended to feed their young bigger prey than their hill-dwelling counterparts. ❧