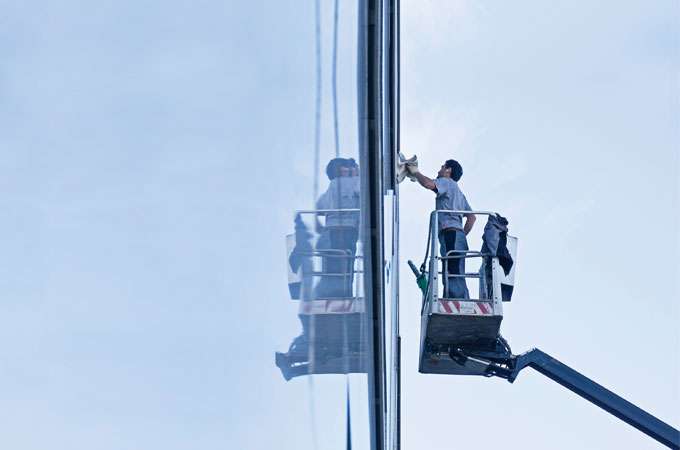 “We take an approach where we actually make the active layer itself transparent,” Lunt says. His solar cells use a variety of small organic molecules—some modeled on buckyballs, others on compounds found in plants—to absorb light. “We can tune these materials to pick up just the ultraviolet and just the near-infrared” wavelengths, he explains. Because the materials don’t absorb light in the visible spectrum, they look transparent to the human eye.

So far, Lunt has made a laboratory-scale solar cell that absorbs near-infrared wavelengths, generating enough electricity to power a small clock. (1)

“There’s a lot more potential in the near-infrared,” Lunt says. In part, that’s because more than half the photons that reach Earth are in this portion of the spectrum, so it’s possible to generate more electricity by capturing a smaller proportion of photons.

One day, transparent solar cells could be available in the form of a flexible film that building occupants could install on their windows, much like existing light-blocking or privacy films. “That would make it a lot easier to retrofit,” Lunt says. And because the materials used in the solar cells are so low-cost and are applied in layers thinner than the thickness of a human hair, Lunt argues that it should be feasible to cover whole buildings with them.

Alternatively, solar cells could be incorporated into the windows themselves, sandwiched in the middle of double-paned glass. They could also be added to other transparent surfaces, such as electronics screens. Either way, the approach gets around one of the bugbears of existing solar technology: installation costs.

Lunt’s transparent solar cells are only about two percent efficient now, but he has calculated that the approach could theoretically yield devices that are at least 23 percent efficient. (2) So Lunt is currently working to increase their efficiency to at least 10 percent and is also discussing with several companies how to commercialize and scale up the technology.