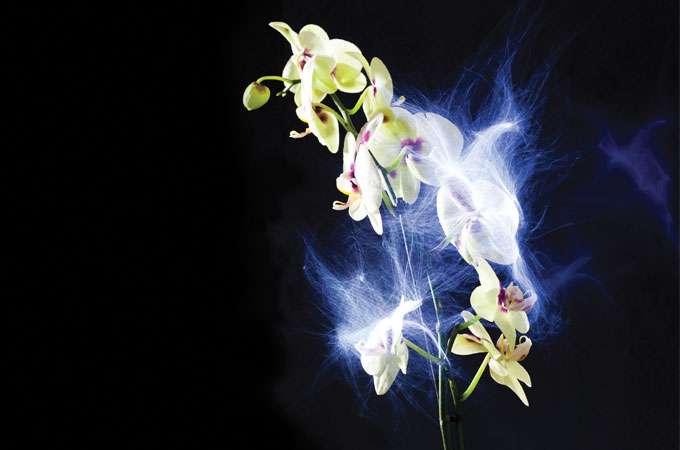 Make music, create a lightshow, and control a computer—with a plant

People are not used to thinking about plants as dynamic, responsive, and sensitive beings. Some intrepid botanists have tried talking to their plants, but the foliage never gave much feedback. Yet scientists keep uncovering amazing ways that plants, in their unassuming manner, actually sense their surroundings.

Engineers and artists have also grown interested in this phenomenon. A new technology called Botanicus Interacticus allows people to relate to plants in a new way. Developed by Ivan Poupyrev, Senior Research Scientist at Disney Research, in collaboration with Philipp Schoessler, Jonas Loh and Munehiko Sato, these enhanced plants respond to human contact with a capacitive touch-sensing technique similar to what’s used in most smartphone touchscreens. 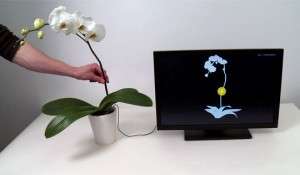 With just a single wire placed in the soil, a plant becomes an electric circuit with a very low current running through. The wire runs to a sensor that registers human contact, which interrupts the current. Electrical signals travel at different frequencies through different paths in a plant, so by monitoring a wide range of frequencies, the sensor can determine the nature of the touch. For example, it can distinguish between a sliding and a grasping motion, as well as where contact was made and how hard the touch was.

The researchers, in collaboration with Berlin-based Studio NAND and TheGreenEyl, showcased Botanicus Interacticus at the Emerging Technologies exhibition of SIGGRAPH 2012. Plants—including bamboo, snake plant, cactus, and orchid (right)—were wired up and placed in front of a two-way mirror. Custom software produced sound and an aurora-like emanation from the plant, based on a user’s gestures. Each plant created a slightly different effect to underscore the different plant forms. Learn more at botanicus-interacticus.com.