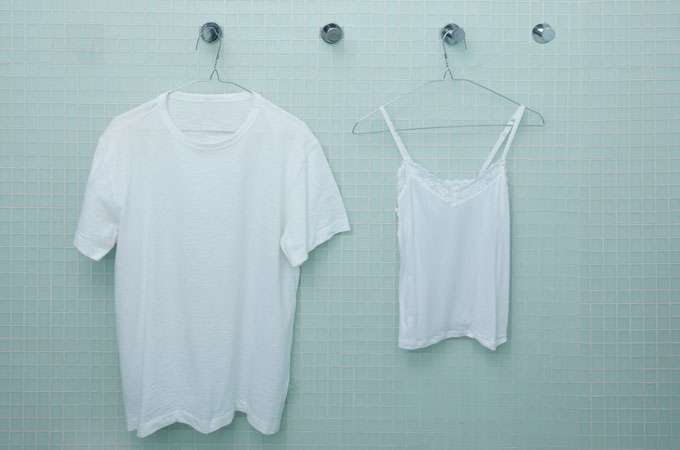 Fashion with an ecological twist

No matter what your style, your clothes make a difference—ecologically, that is. We buy a lot of clothes. In the U.S. alone, 19.4 billion garments were sold in 2011; 97 percent of them were manufactured abroad. We wash a lot of clothes: the average American family runs almost 400 loads of laundry per year. And we throw away a lot of clothes: the U.S. Environmental Protection Agency estimates that 13.1 million tons of textiles went into the waste stream in 2010. A growing number of conservation-minded designers and scientists are working to alter the industry. 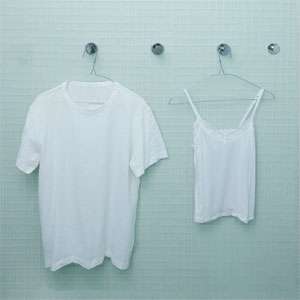 Cleaning your clothes could mean skipping the laundromat and eliminating a lot of water and detergent use, if they’re made out of a new cotton fabric enhanced with nanoparticles. Chinese materials scientists have created a fabric coated with nanoparticles of a titanium dioxide–nitrogen compound that, when exposed to sunlight, removes stains and kills odor-causing bacteria. Titanium dioxide is already used in self-cleaning surfaces such as windows and bathroom tiles. It’s also found in more ordinary products such as paint, sunscreen, and food coloring. But when brought into the fashion realm, it can slash clothing’s water footprint that accumulates through all those wash cycles. 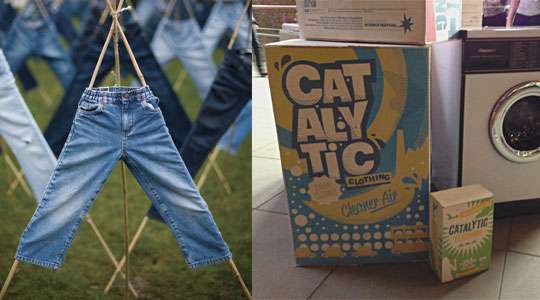 Designer Helen Storey of the London College of Fashion and chemist Tony Ryan of Sheffield University have joined forces to develop clothes that double as air purifiers. Their technology, called Catalytic Clothing, uses a photocatalyst that reacts with airborne pollutants. The titanium-oxide coating converts nitrous oxide into soluble nitrate and volatile organics into fatty acids and soaps. The team is now developing air-filtering additives for laundry detergent so that consumers can treat their own clothes. They estimate that one square meter of coated fabric can remove 0.5 grams of NOx from the air per day. 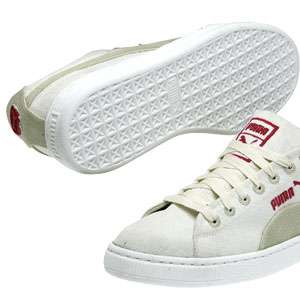 Biodegradable shoes are going mainstream with the introduction of Puma’s soon-to-be-released InCycle collection. New products will include biodegradable sneakers and shirts, along with a recyclable jacket and backpack. The “Basket” sneaker (right) consists of an upper of organic cotton and linen and a sole composed of a bioplastic. Once disposed of in a composting facility, it degrades at least 90 percent within six months. 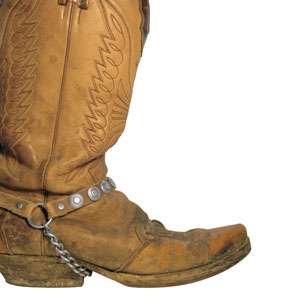 We may be entering a new, wild frontier: tissue-engineered, 3-D–printed leather for boots, handbags, and more. Modern Meadow, a startup company which recently received financial backing from PayPal cofounder Peter Thiel, is perfecting the production of leather without toxic wastes and without the large footprint of raising cattle—not to mention the killing of animals. The company is also working to produce in vitro meat but expects its leather to make it to market sooner. 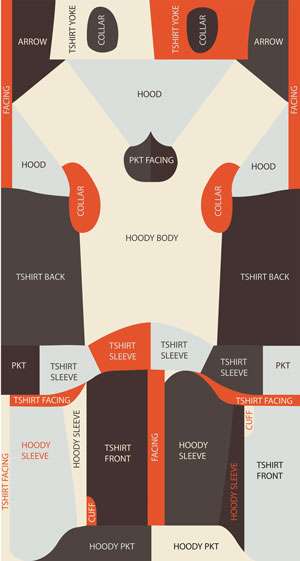 Approximately 15 percent of fabric becomes waste in the process of making an article of clothing. But a movement is afoot to clean up the cutting-room floor with zero-waste fashion design. The puzzle-like pattern above, from New Zealand designer Holly McQuillan, fits all the components of a men’s hooded jacket and t-shirt onto a single piece of fabric. McQuillan is one of a committed cadre of fashion designers working to bring these design principles into the mainstream.

Fabric made from milk 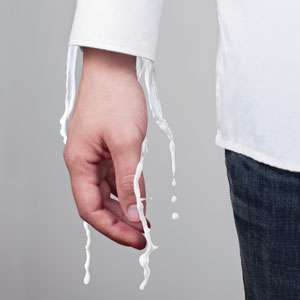 It looks and feels like silk, but a new fabric called Qmilch from German designer Anke Domaske is made entirely of fiber derived from milk that fails to meet regulations for human consumption. It’s made almost entirely from the protein casein, extracted from powdered milk, and requires no chemicals to produce. Only two liters of water are needed to create one kilogram of fiber, according to Domaske, whereas cotton requires thousands. Domaske sells garments made of Qmilch through her clothing line Mademoiselle Chi Chi. 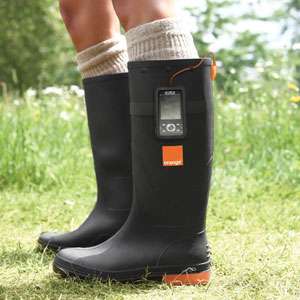 British communications company Orange, in collaboration with renewable-energy experts GotWind, created a boot that charges a mobile phone by using the heat from feet. The wellies were designed for the 2010 Glastonbury Festival to keep concertgoers connected. In the sole of the boot, thermocouples are sandwiched between ceramic wafers. When heat from the foot hits the top wafer, and cold from the ground hits the bottom one, electricity flows. 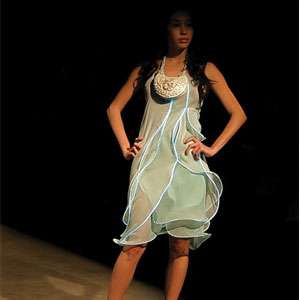 Clothing could soon charge electronic gadgets by means of energy-generating fibers developed by materials scientists at the University of Bolton in the U.K. Inventor Elias Siores has created a flexible fiber that is both piezoelectric (meaning it can harvest energy from movement) as well as photovoltaic (it can collect solar energy). And because it’s flexible, it can be woven into garments. Along with the ability to charge electronics, piezoelectric clothing can also light up. Designers in the high-fashion world, including technophile designer Diana Eng, are taking piezoelectric technology onto the runway (above). 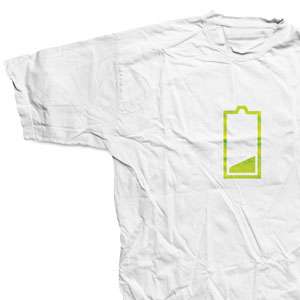 University of South Carolina engineers have recently devised a way to store power in an ordinary cotton t-shirt. To create their flexible, wearable battery, they first soaked the t-shirt in a solution of fluoride—then dried it and baked it in an oxygen-free oven (to avoid charring and combustion). In the process, the cotton fibers were converted into activated carbon, which is able to hold an electric charge. The engineers found they could enhance these electrodes by coating the fibers with a nanometer-thick layer of manganese oxide. The t-shirt battery’s performance didn’t diminish, even after thousands of charging cycles.