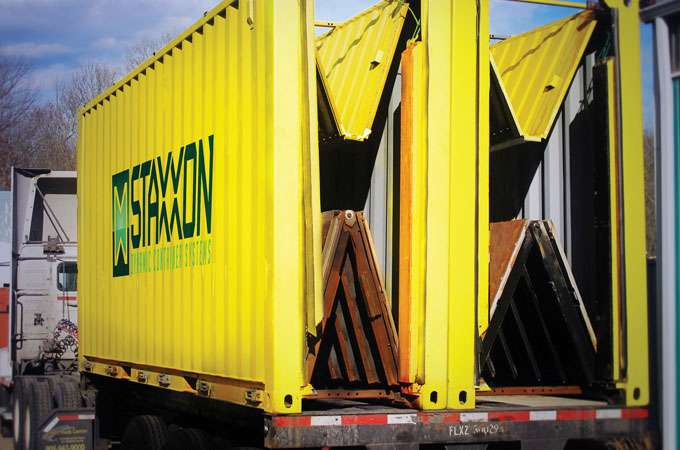 A simple design could shrink the energy footprint of moving cargo

The worldwide shipping industry—the fleet of giant ships carrying more than half the goods moved around the world each year—owns more than 17 million shipping containers. About 20 percent of those containers are empty, and they’re not always in the right place to be loaded with goods for the next shipment. Moving one of these behemoths—whether on a truck, by rail, or by sea—demands a lot of fuel. Simply loading one on or off a ship or truck takes energy and time, leaving ships idling in port and trucks idling in line—and that burns through even more fuel.

The startup company Staxxon thinks it has hit on a way to make the movement of millions of empty shipping containers more efficient. The company thinks that, over three to five years, it could eliminate 40 percent of the lifts and moves of empty containers at marine terminals and ports, according to Tom Stitt, the company’s marketing director.

Staxxon has designed containers that work just like traditional containers—until they’re ready to be loaded, empty, onto a ship or truck. Then, like an accordion, they fold in on themselves vertically, shrinking to as much as one-fifth their normal size. Set side by side, five containers take the space of one and require less time and energy to load. The efficiency extends beyond the dock, as one diesel truck can deliver five containers to a port instead of just one.

Staxxon is not the only company to have designed a folding shipping container. But so far, the shipping industry hasn’t found one it likes. “It is a quite conservative industry. The container we use today was invented in the 1950s,” says Jacob Sterling, head of environment and corporate social responsibility at Maersk Line, a Copenhagen-based shipping company. But with the ever-rising price of oil, shippers are looking to save energy and are open to ideas. Staxxon is just now starting to test its model at terminals: it has the potential to be the folding container that finally convinces shippers to start switching over.