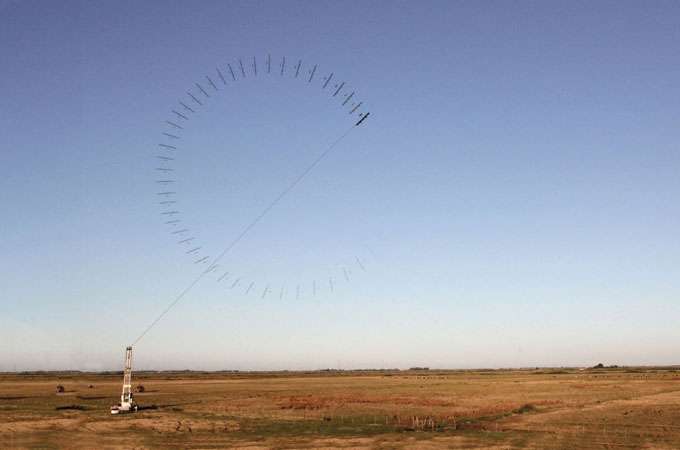 Move over, Ben Franklin. Electricity from kites is back.

Hood River, Oregon, is a small town in the Columbia River Gorge that bills itself as the windsurfing capital of the world. As a teenager, Corwin Hardham was a Hood River regular. Zipping back and forth across the river, blown by the winds funneled through the gorge, he got a first-hand sense of their strength.

Now Hardham, a Stanford-trained engineer, has teamed up with former professional windsurfer and kiteboarder Don Montague to take his passion for the wind and kites into the green-energy realm. Their company, Makani Power, has developed an airborne wind turbine—in effect, an enormous, tricked-out kite—that will be able to harness the greater energy potential from winds at altitudes higher than those exploited by conventional wind turbines.

Recent work published in Nature Climate Change calculated that high-altitude winds could provide more than 1,800 terawatts (TW) of energy—100 times as much as today’s global power demand. (1) By comparison, conventional turbines, perched on hillsides and ridges to capture only fickle surface winds, can harness energy only at the rate of 400 TW.

For more than a century, scientists and engineers have dreamed up ways to draw energy from high-altitude gales. Until recently, though, the engineers’ reach has exceeded their grasp. Makani Power (“makani” is the Hawaiian word for “wind”) is one of several companies out to change that. The Makani kite design—a nearly 100-foot-long, carbon-fiber wing lined with turbines—is capable of flying between 800 and 2,000 feet in the sky and generating 600 kW of energy along the way. Energy is transferred to the electrical grid via a long tether leading down to the ground or to buoys out at sea. The device will fly in loops perpendicular to the wind, mimicking the path of a spinning turbine blade; flaps on the wing control its path.

“What we’re doing,” Hardham says, “is marrying conventional aerodynamics with the technology of wind turbines, and using a lot less material.” Since it’s so streamlined and light, the airborne turbine can operate under a wide range of conditions. Even in winds blowing less than 15 miles per hour—speeds that render conventional turbines worthless—the airborne turbines will be able to fly at close to 100 miles per hour, continuing to generate power.

Hardham says that Makani’s design allows the flying wind turbine to deliver energy at an unsubsidized cost competitive with that of coal (the industry’s current measure of low-cost energy) and at half the current cost of conventional wind turbines.

Hardham also touts the airborne wind turbines’ conservation potential. “Wind turbines have gotten a really bad rap, probably too much so,” he says, “but most of were due to placement of the turbines.” As a mobile, higher-altitude vehicle, the airborne wind turbine will circumvent a lot of issues. If a flock of birds moves into an area, the turbine itself can simply be moved. Also, birds won’t be able to perch on an airborne turbine, to say nothing of nesting on one.

Even in its initial stages, the Makani airborne wind turbine attracted a lot of attention for its mix of fringe and feasibility. In 2006, Google invested $10 million in the company through a renewable-energy initiative. Then, in 2010, Makani was awarded a grant from the Advanced Research Projects Agency for the Department of Energy (ARPA-E) in response to a call for proposals for “disruptive technologies”—long-shot projects that use radically different value systems to upend existing paradigms. The interest in clean energy on the part of ARPA-E was part of a larger effort that journalist Michael Grunwald recently called “the silent green revolution”—an investment of more than $90 billion in wind, solar, and biofuels projects, among other things.

Two years and several million dollars later, Hardham and his colleagues had a working prototype, which they have since scaled up; they are currently testing a wing that is 30 feet long and generates 30 kW of power. Hardham estimates that Makani is three to four years from having the full-size airborne turbine commercially available. He envisions squadrons of these turbines buzzing around in great circles for months at a time. “Building these things is not a fundamental challenge anymore—it’s just a question of good engineering,” he says.

Editors’ note: As this article went to press, we were sorry to learn that Corwin Hardham had died unexpectedly in Alameda, California, on October 23. He was 38.