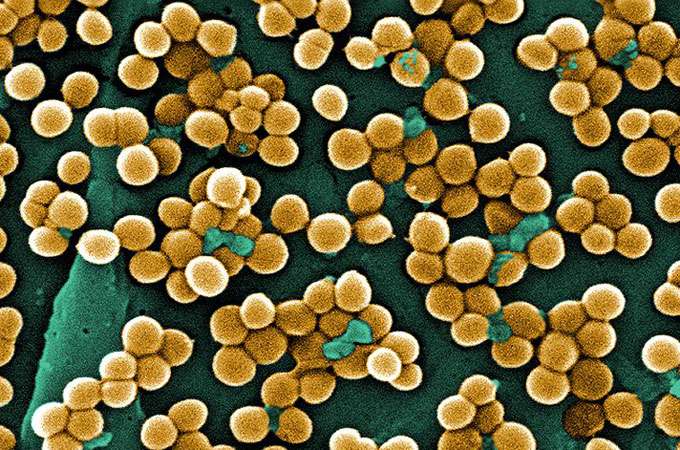 Wild animals in Iowa are carrying an antibiotic-resistant superbug, scientists have reported in the Journal of Wildlife Diseases.

The pathogen, methicillin-resistant Staphylococcus aureus (MRSA), is a bacterium that can resist antibiotics called beta-lactams, which include penicillin and methicillin. Humans infected with MRSA often suffer from rashes and abscesses; if the bacteria enter the bloodstream, they can be lethal. These microbes cause about 18,000 deaths in the U.S. per year.

MRSA can also infect other animals, and researchers have found the bacteria in pets and livestock. But little has been done to search for this superbug in the wild.

Tara Smith, an infectious-disease epidemiologist at the University of Iowa in Iowa City, and her colleagues partnered with Iowa State University’s Wildlife Care Clinic in Ames, which cares for injured wild animals. Clinic staff members collected samples from 114 “patients” and sent the specimens to Smith’s team for analysis.

The team found methicillin-sensitive S. aureus in five birds, a beaver, and a fox squirrel. MRSA showed up in a pair of eastern cottontail rabbits and a shorebird known as the lesser yellowlegs. A pigeon also carried an S. aureus strain that was moderately resistant to glycopeptide antibiotics, which include vancomycin—a drug generally used only after other antibiotics have failed.

The researchers aren’t sure whether the animals picked up MRSA from pets, livestock, humans, or the environment. And it’s not clear whether the wild animals “present a danger to pets or vice-versa,” says Smith. Previous studies suggest that humans and other animals can exchange the bacteria, since pets and owners often carry the same strain. Birds also could transport MRSA to new places on their migratory routes, the authors speculate.