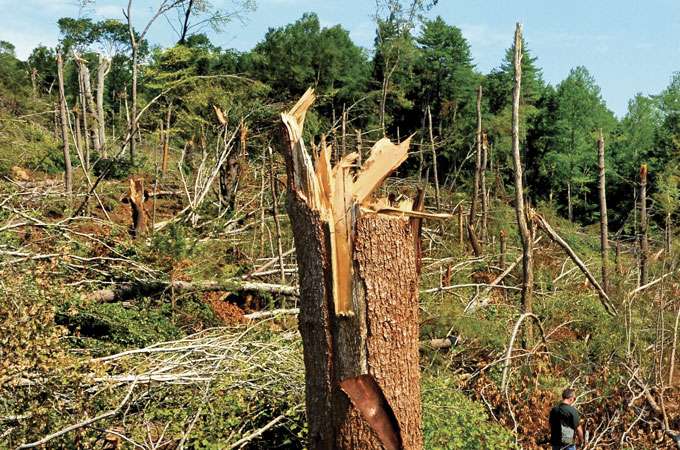 After a hurricane flattens a forest, people often swoop in to collect the downed trees and clean up the mess. But a new study suggests that nature should just be left alone. Given enough time, trees will regenerate on their own—and human interference could make it easier for invasive species to move in.

“The most environmentally sound thing to do is to leave the forest right where it is,” says study coauthor David Foster, an ecologist at Harvard University’s Harvard Forest in Petersham, Massachusetts.

A strong storm can rip three-quarters of a forest’s trees out of the ground. Landowners or managers will often harvest and sell the logs to recoup the forest’s economic value, quell concerns about fire risk, or simply restore order. “There is a general tendency to want to do something,” says Foster. “Underlying a lot of this is the perception that nature needs help.”

To find out how a forest would fare without human intervention, researchers simulated a hurricane in a section of Harvard Forest in 1990. The team used a winch and cable to pull down 276 trees, which damaged another 325 trees when they fell. The researchers then monitored the site for the next two decades, noting changes such as sprouting, sapling growth, and shifts in species composition.

Within the first three years, about half of the trees died, the team reports in Ecology. But the forest soon began to mend. Fallen trees that might have been presumed dead sprouted and regrew. With many of the larger trees gone, seedlings and saplings shot up.

Surprisingly, the trees that dominated the forest before the hurricane simulation weren’t replaced by other species. Forty-two percent of the tree area was covered by oaks that hadn’t been pulled down, and new trees grew mainly from seedlings or saplings that had already been present before the “disaster.” New species of shrubs and herbs moved into the site, but only about a quarter of them lasted until 2010.

The study suggests that forests in the northeastern U.S. are incredibly resilient to this type of disturbance, says Foster. And cleaning up trees could actually hurt the process of recovery by increasing erosion and giving invasive species an opportunity to colonize the site.

Photo: Broken and snapped-off trees at the tornado impact area of the McKinstry Brook Wildlife Management Area in Southbridge, Massachusetts, 2011. This area has been left to regenerate naturally. MassWildlife photo by Bill Byrne.