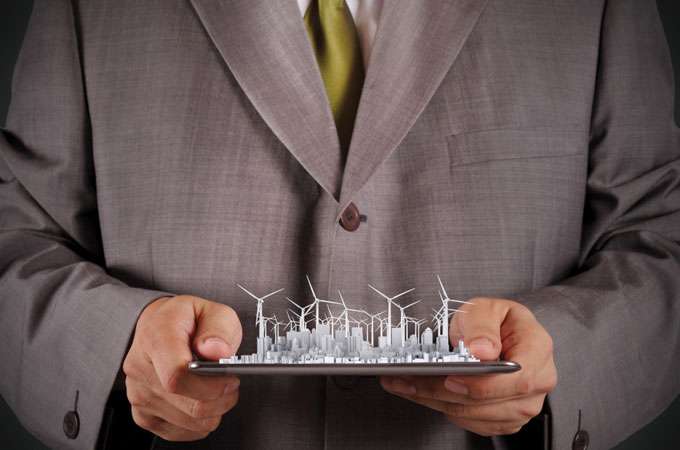 Too many turbines can sap wind power

Though it may seem like an infinite resource, even wind energy can be tapped out. A new estimate of Earth’s overall wind potential suggests wind-farm density reaches a saturation point beyond which additional turbines yield no increase in power. The findings suggest wind farms will need sufficient space to increase efficiency and meet demand.

To determine the overall limit on Earth’s wind energy, the research team created a global 3-D model of the atmosphere that evaluates the physical impact of turbines on circulation. They found energy output increased proportionally to the number of turbines, up to a certain threshold. After that point, additional turbines harvested more power—but less efficiently. In a saturated region, new turbines still reaped energy from the wind, but their interference reduced the energy available to other turbines, keeping totals steady.

The calculations show that space is key to maximizing wind’s potential. “It is well known that spreading wind turbines in a farm increases farm-array efficiency,” the authors write. “The results here suggest that staggering farms themselves, geographically, improves the overall power output.”

While the findings reveal wind’s limits, they also show its potential. The model suggests 4 million turbines can exceed the world’s clean-energy targets for 2030, with proper placement. For this set number, the energy yield nearly doubles when turbines are dispersed freely on land outside the tropics and polar regions compared to turbines placed at eight targeted locations. Optimal arrangement makes the difference between surpassing projected demand and coming up short.

Careful planning will ensure saturation doesn’t restrict wind energy. “Spreading wind farms out worldwide in high-wind locations will increase wind-farm efficiency and reduce the number of farms needed, compared with packing wind farms side by side,” the authors write. “The careful siting of wind farms will minimize costs and the overall impacts of a global wind infrastructure on the environment.”