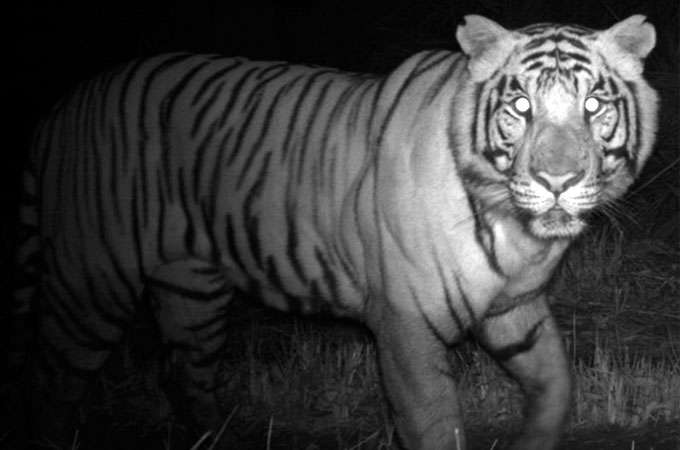 Tigers coexist with humans by taking the graveyard shift

Making way for Asia’s king of the jungle may no longer be the only option for conservationists looking to protect tiger populations. Although many think the big cats require reserves away from human activity, a new analysis of camera-trap data from Chitwan National Park in Nepal reveals humans and tigers can coexist by occupying the forest at different times of day. The findings may open up new opportunities to protect the endangered animals in the face of mounting population pressure from nearby settlements.

Known for being shy and elusive, tigers are thought to avoid populated areas where they would have to compete with humans for space and resources. To test this notion, researchers set up camera traps in and around Chitwan to assess tiger, prey, and human activity in the shared-use forests surrounding the park compared to more secluded areas. Chitwan is a premier tiger reserve at the base of the Himalayas. But the surrounding area also supports more than 200,000 people. Nearby residents frequent the jungle to gather firewood and food for livestock.

The photos, collected over two years, show that tigers did not avoid areas frequented by humans but instead lay low in daytime hours during peak human activity. While 20 percent of all tiger sightings within the park occurred during the day, only five percent of sightings outside the park occurred in daylight. The switch to a more nocturnal schedule allowed humans and tigers to share the same space at different times.

While further research is necessary to determine the factors contributing to coexistence, the findings suggest good conservation may go beyond mere zoning. “At the very least it forces conservationists and policy makers to rethink some of the basic premises of conservation models,” says study author Neil Carter of Michigan State University. “This kind of opens the door a little bit. There might be a possibility to have these animals coexist even in areas where there are people and human activities.”

With 80 percent of the tigers’ range occurring outside protected areas in mixed-use forests, that’s good news. Smart measures such as restrictions on nighttime driving and better overnight security for livestock could ensure that residents coexist peacefully with these endangered beasts.