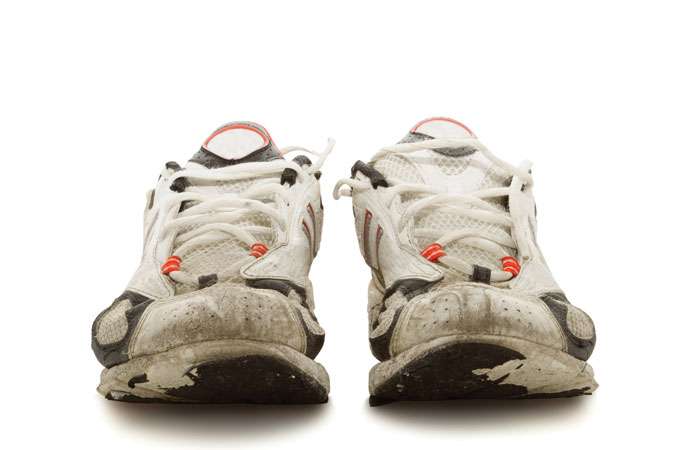 The Origins of Running Shoes 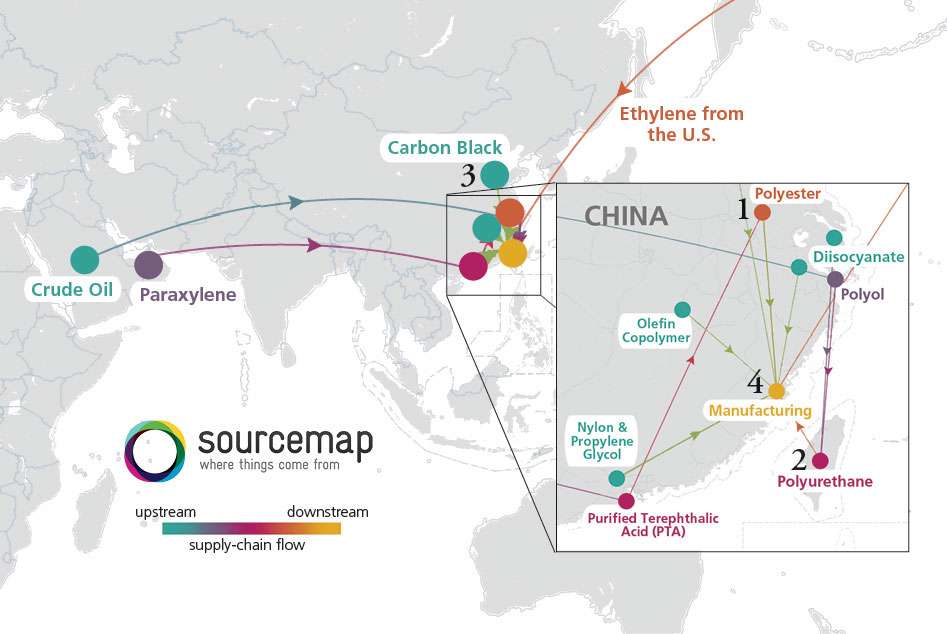 When you look at an athletic shoe, think oil. Some shoes contain cotton, leather, and/or trace amounts of natural rubber. But what you lace up before pounding the pavement is probably an assortment of industrial chemicals derived from hydrocarbons.

Two petroleum-based synthetics—polyester and polyurethane—make up 36 percent of the weight of a typical running shoe, including packaging; these synthetics are responsible for 57 percent of the carbon footprint of the shoe’s materials. From extraction to the end of the shoe’s life, the entire carbon footprint of this typical pair of running shoes is equivalent to using a 100-watt light bulb for a week. (1)

Polyester accounts for 11 percent of the shoe’s weight. (1) It begins as the oil-refinery product paraxylene, which is then transformed into purified terephthalic acid (PTA). That’s the raw material for polyester fiber and PET plastic containers.

Polyurethane foam, used in the shoe upper, contains tiny air cells produced in a chemical reaction called the “blow reaction.” This reaction relies on industrial chemicals called diisocyanates, which along with water, catalysts, and additives produce the heat and gas to make polymers foamy. The U.S. used 214.5 million pounds of pure methylenediphenyl diisocyanate in 2010; chemicals from the diisocyanate family are found in everything from bike helmets to home insulation to impact-absorbing foam in motor vehicles.

Carbon black reinforces shoe-sole rubber and protects the polymers from degrading in UV light. The nearly pure carbon powder is made by partially combusting oil or natural gas and, sometimes, vegetable oil. It accounts for only about two percent of a sneaker’s composition, but carbon black is also used all over your car in black rubber parts such as belts—but especially in tires. It’s used in toner and printer ink, too.

An Asics GEL‐Kayano 17 trainer has 65 different parts and 360 processing and assembly steps. The Chinese plant at which it’s manufactured accounts for 68 percent of the shoe’s carbon footprint: the plant is powered and heated by coal. As with a cell phone, the complex assembly of small, light, running-shoe components likely intensifies the energy use and greenhouse-gas emissions during the manufacturing process. (1)

This map represents one possible supply chain for a running shoe. Explore it further at http://free.sourcemap.com/view/4806.

Created in partnership with Sourcemap.