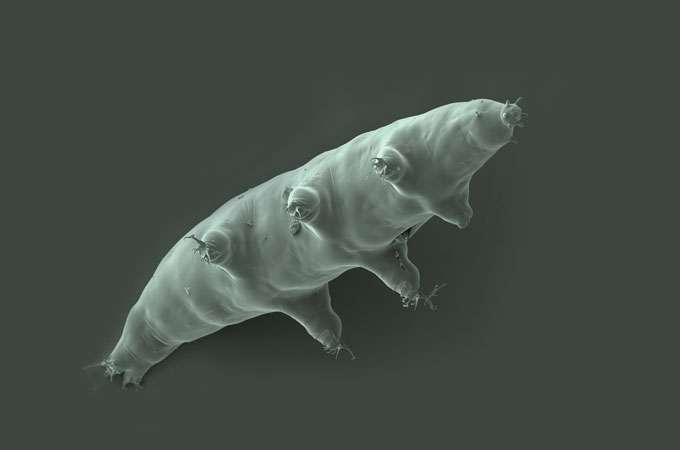 Biological samples are fragile: if they’re not kept at cold temperatures, they quickly degrade. And refrigeration in labs and on trucks, planes, and ships is costly and requires a huge amount of energy.

The company Biomatrica has developed a solution that allows these fragile materials to be stored at room temperature. The technology mimics the microscopic water bear’s survival strategy. The water bear, an arthropod also known as a tardigrade, lumbers across moist surfaces of mosses and lichens. But when those dry up, the water bear goes into a suspended state that could last anywhere from a few months to a century. Other organisms, such as brine shrimp and the resurrection fern, employ similar strategies to survive extreme conditions.

Judy Müller-Cohn and Rolf Müller, founders of Biomatrica, were inspired by a visit to a toy store, where they saw sea monkeys (brine shrimp in their dried state) for sale. Müller-Cohn, a molecular biologist who has lost thousands of samples due to freezer breakdowns, and her business partner, Müller, looked into extremophile biology for an alternative storage method.

The key is the sugar trehalose. As water becomes scarce, trehalose inside the water bear loses water. Instead of forming sharp-edged crystals that can damage DNA, membranes, and cells, the sugar transforms into a glassy state. This sugar-glass surrounds the water bear’s molecules, protecting them from high temperatures and also preventing chemical reactions and denaturation. All it takes to revive the water bear is water, which dilutes the trehalose and gently releases the molecules from their suspended state.

Biomatrica created a molecule that performs the same function as trehalose—to stabilize biological samples for transport without refrigeration. The potential environmental benefits are huge. In a 2009 study, Stanford University researchers estimated that replacing 2,000 laboratory freezers with room-temperature storage technology could, over a ten-year period, reduce the university’s carbon footprint by 18,000 metric tons—the equivalent of consuming 1.83 million gallons of gasoline. Considering that in the U.S. alone, there are more than 40,000 biological and biomedical research laboratories located on university campuses, the potential savings thanks to the tiny water bear are tremendous.