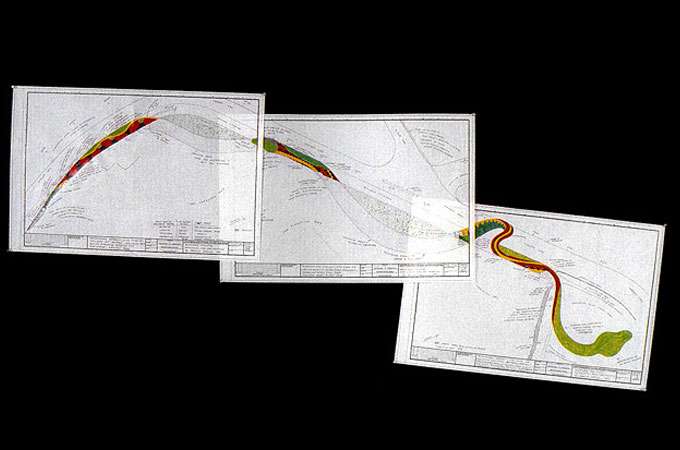 For the past three decades, a handful of artists have taken up that challenge, creating work that has aesthetic appeal while also addressing environmental problems. This photo essay presents words and images from some of those artists. Their works span environments from the Utah desert to a Finnish lagoon. Some become permanent infrastructure, whereas others are designed to disappear, to become obscured by reinvigorated ecological processes.

This isn’t art that simply portrays environmental issues or seeks to educate the viewer. It’s art that cleans water, creates habitat, controls erosion. The art itself has an ecological and restorative function. (Image above ©Patricia Johanson) 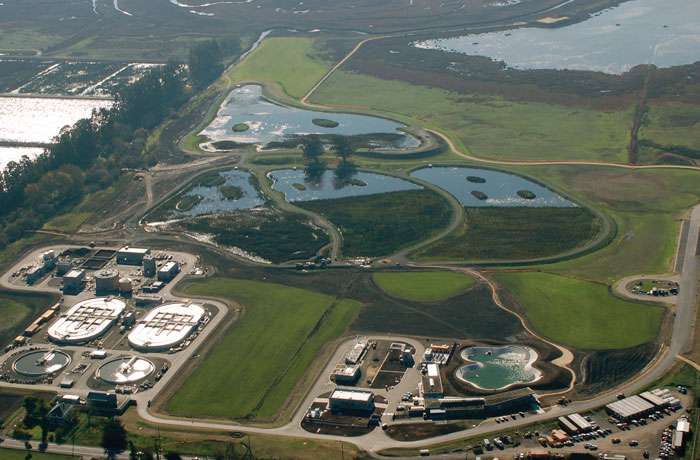 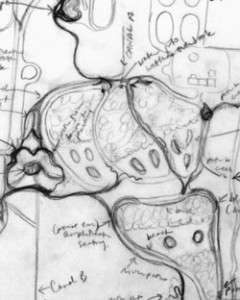 Patricia Johanson trained as a painter. Now she sketches on the landscape. Since the early 1980s, Johanson has been designing large-infrastructure projects that incorporate images of species relevant to each site.

The Ellis Creek Water Recycling Facility in Petaluma, California, incorporates the image of the salt marsh harvest mouse. The image in each of her projects “is something people can latch on to,” Johanson says. “It’s the first thing people notice, but it’s the last thing that goes into the design.” The mouse consists of a series of water-treatment ponds, with two islands for eyes and rounded banks of earth that indicate ears. “If you make a slight suggestion, people’s brains will fill in the details,” she says.

Johanson’s designs don’t create just images of species but also habitat for the real thing. At Ellis Creek, the trails around the ponds have become a birder’s paradise, with the salt marsh home to a population of endangered California clapper rail. “If the tidal elevations are correct, the marsh will recreate itself,” she says. “I work as somebody who sets the ball in motion. I don’t do every detail. I let nature do the details.” 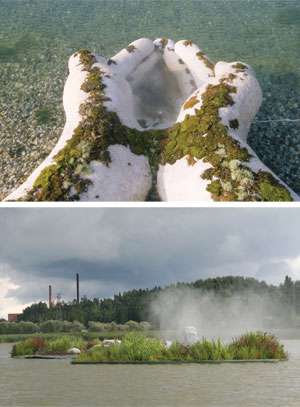 In the mid-1990s, Jackie Brookner began to make concrete forms covered with moss. “I think of them as sculpted wetlands,” she says. One of these Biosculptures, a nine-foot-long pair of cupped hands, is part of a public swimming-pool complex in Germany where the water is filtered entirely by wetland plants.

Yet Brookner was soon restless. She wanted her art to function at the scale of environmental problems. So she began working on landscape-scale projects such as a series of floating islands (titled Veden Taika, “The Magic of Water”) that provide nesting habitat for waterfowl while cleansing the water in a Finnish lagoon, which was formerly part of a sewage-treatment plant. “The water quality is improving,” Brookner reports. “The birds have maxed out the islands.”

But success sparks a new conundrum. “Now, because they’re a few years old, they’re really looking quite natural,” she says. Brookner designed a mechanism that periodically emits a puff of mist, a kind of ephemeral sculpture, from the center of one of the islands. “I wanted to remind people that these are human-made, that humans can do good things for other species.” 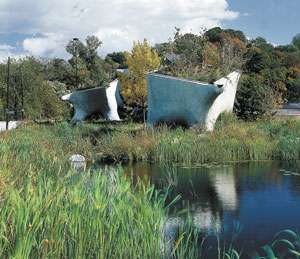 A herd of six abstract, organic forms alongside a Toronto highway: some people see polar bears, others say sheep or mastodons. In fact, they are giant plant pots.

Noel Harding made the sculptures as an artist in residence at the Canadian Plastics Industry Association in the mid-1990s. The white polystyrene containers hold layers of various types of plastics that provide filtration and a soil structure in which wetland plants take root. Solar pumps draw water from the heavily polluted Don River into the miniature but functioning ecosystems. “The water coming out is clean,” says Harding. 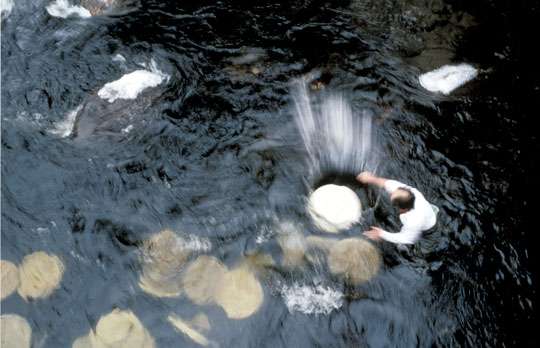 In the early 1980s, Buster Simpson hewed chunks of limestone into 24-inch-wide disks and tossed these sculptures into the headwaters of the Hudson River, downstream from a disused molybdenum plant. “I guess you would have to consider what I did as illegal dumping,” Simpson says. “Or it could be considered socialized medicine.” The work played on the use of limestone slurry to neutralize acid streams. Simpson was, in effect, giving a giant antacid pill to a distressed river. One of the disks, removed after a dozen years, had dissolved to about one-third of its original bulk. “I tell the curators and the museum directors [in New York], all they have to do is turn on their tap water, and my piece is coming out of it.” Lately, Simpson has been thinking about how to apply the antacid concept to the growing problem of ocean acidification. “I’m planning on it,” says the provocateur—but he declines, for the moment, to specify exactly how. 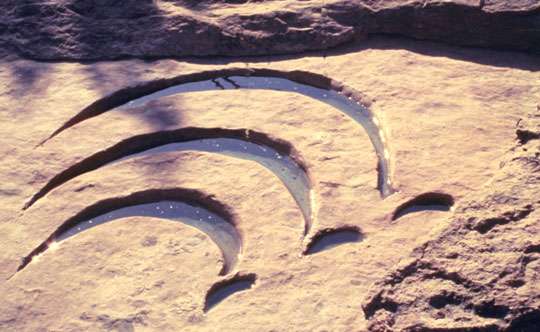 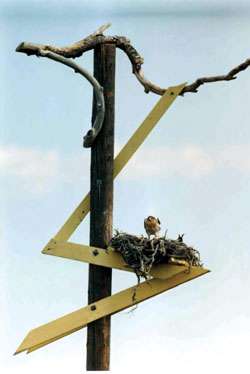 To Lynne Hull, creating habitat isn’t so different from creating pottery, which is how she started out in the art world. “I’m making containers for life instead of for food,” she says.

Her first foray into art-as-habitat was literally a series of vessels: geometric, petroglyph-like shapes carved into desert stone in Utah and Wyoming. “I’d seen natural water-capture basins in the Southwest, and I just thought, well, I could go out and carve a shape in the rock that would hold water for wildlife,” she explains.

More recently, recognition of the danger to birds of prey from electrical poles prompted Hull to install wooden sculptures for perching and nesting at a handful of sites throughout Wyoming. Indeed, raptors are often spotted perching on the sculptures, and a pair of ferruginous hawks successfully fledged a brood from one nesting platform. “In a lot of cases I consider it a collaboration [with birds],” Hull says. “The sculpture on one might have looked pretty skimpy until the nest was built, and then it was perfectly in balance.” 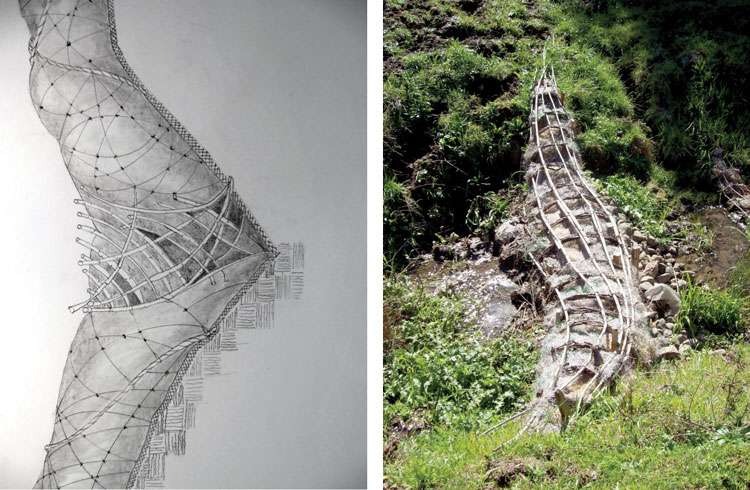 She often takes the lead on research, and McCormick on design of projects. “We both do the hands-on installation and fabrication,” McCormick says. And for each project, they seek out a scientific “mentor,” an expert from academia or a conservation organization who knows and has access to the site.

“We started with construction techniques from the Dust Bowl era,” McCormick says. For example, a retaining wall to control erosion is made out of live willows woven together, rather than stone riprap. Yet it would be hard to mistake McCormick and O’Brien’s sinuous silt traps and intricately woven bulwarks for something built by, say, the Civilian Conservation Corps.

The structures are visually striking but ephemeral. “We do not want our sculptures to last more than two or three years,” McCormick says.

“It’s not that we create biodegradable art; that’s not it,” O’Brien adds. “The art lays the foundation for something else to take its place.” For example, when a weaving of willow and elderberry made in the dormant season springs to life a few months later, the new growth obscures the artists’ toil.

“It’s not the easiest type of work to explain,” O’Brien says, a comment that might apply to any of the artists discussed here. But, she adds, “as soon as we bring someone to a site, they generally get it.”