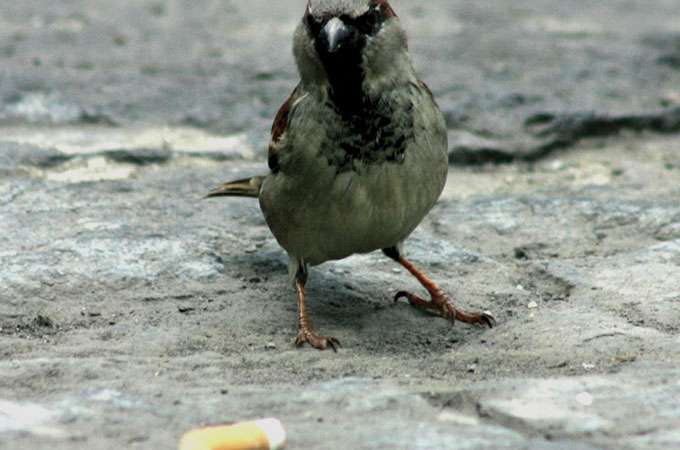 Urban birds use cigarette butts to keep parasites away

City-dwelling birds have an odd habit of lining their nests with bits of cigarette butts. Now scientists have figured out why: the nicotine in the butts may help keep parasites away.

Birds often bring parasite-deterring plants into their nests. Faced with different nesting materials in the city, some birds have taken to using the cellulose fibers from smoked cigarette butts instead. Nicotine is forced through the fibers when someone smokes a cigarette, and the study authors speculate that this chemical might act as a mite repellent.

The team set up parasite traps in house sparrow and house finch nests in Mexico City. The heated traps attracted parasites, which then became stuck to pieces of tape. The researchers included cellulose fibers from the filters of smoked Marlboro cigarette butts in some traps, and fibers from the filters of unsmoked cigarettes—which would not contain nicotine—in others.

Fewer parasites were attracted to the traps with fibers from smoked cigarettes, the team reports in Biology Letters. The researchers also analyzed the birds’ nest materials and found that 89 percent of house sparrow and 86 percent of house finch nests contained cigarette-butt fibers. The more fibers the birds used, the fewer mites the team found in the nest.

The results suggest that nicotine in the fibers of smoked butts repels the mites, the study authors say. But cigarette butts can also hold other nasty chemicals such as pesticides. So the birds might be protecting themselves from parasites—yet bringing toxic materials into their homes.