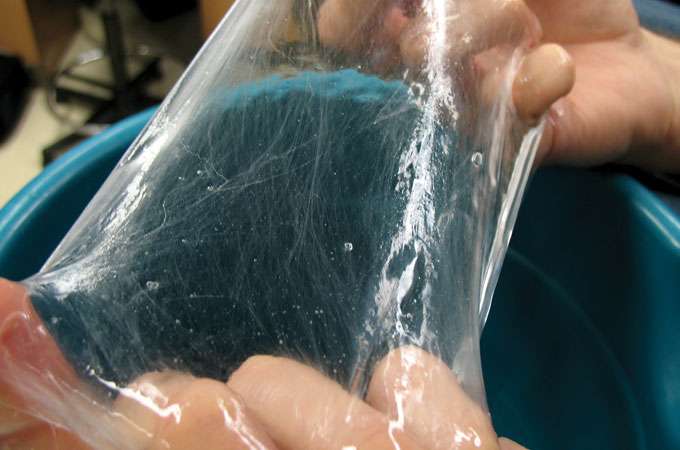 Slime Is the New Silk

The hagfish is not exactly a style icon. It’s an ugly, eel-like creature that eats carcasses on the ocean floor and spews slime at its predators. But hagfish-slime fibers could one day be used as a sustainable material for clothing and other textile-based products, researchers say.

Hagfish are covered with glands that produce a thick, white fluid. The fluid mixes with seawater to form slime, which the animal might use to clog the gills of attackers such as sharks. “Something tries to eat a hagfish, it gets a mouthful of slime,” says Douglas Fudge, a biomechanics researcher at the University of Guelph in Ontario, Canada.

What interests Fudge are fibers in the slime, which are nearly as strong as spider silk. The fibers are made of linked proteins. Scientists could potentially mass-produce the hagfish-slime proteins by engineering bacteria or yeast to crank them out. If those artificially made proteins could then be assembled into fibers, the material might be a promising replacement for petroleum-based textiles such as polyester.

To find out whether fibers could be made from slime proteins in the lab, Fudge’s team anesthetized some hagfish and stimulated the animals’ muscles to make them release slime. Then the team isolated proteins from the slime and tried to assemble them into fibers again.

Fudge and his colleagues found that by placing a small drop of slime protein on a salt solution, they could make the proteins congeal into a film. The film could then be pulled off the surface to form a fiber, the team reports in Biomacromolecules.

While these lab-made fibers aren’t as strong as the natural fibers in hagfish slime, the study is a first step toward producing a slime-based material. Fudge’s team is now working on making stronger fibers.