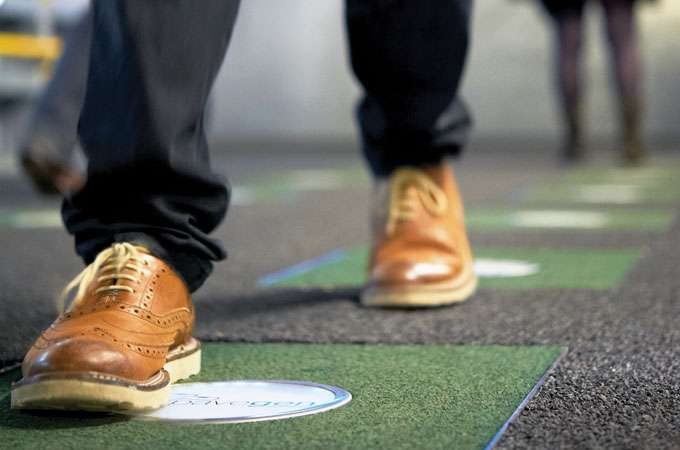 Stepping Off the Grid

It’s not necessary to jump on Pavegen tiles in order to make them produce energy or light up like fireflies. Simply stepping on them will do. But often people standing on Pavegen tiles—at international festivals and publicity events, in subway stations and school hallways—do find themselves jumping up and down. It’s fun to see the tiles light up and to know that you’re creating energy just by landing on the floor.

Pavegen is one of a few companies around the world creating floor tiles that harvest energy whenever a person walks on them. As wind turbines tend toward gigantism and solar power installations stretch farther than the eye can see, this energy-harvesting technology empowers people in the everyday world to create clean energy on a hyperlocal scale.

Each step on a tile generates a tiny amount of energy: about four to eight watts. But when a set of these tiles is installed in an area with high foot traffic—a public plaza, a mall, or a large office building—the thousands upon thousands of steps can create enough energy to run strings of street lights or charge thousands of mobile phones.

Designing tiles that produce even that much energy has proved a technical challenge. After experimenting with different models, Pavegen settled on a hybrid generator that’s partly piezo-electric (meaning it creates energy in response to pressure) and partly electromechanical. When someone steps on a tile, depressing it a few millimeters, the energy is captured mechanically. Beyond that, for competitive reasons, Pavegen founder Laurence Kembell-Cook doesn’t like to give too many details about how the tiles work.

But they definitely do work: an installation of 12 tiles in a London subway station during the 2012 Summer Olympics generated a very respectable 20 kWh of energy over two weeks—enough to power the subway’s lighting system and almost enough to power an average American household for a single day.