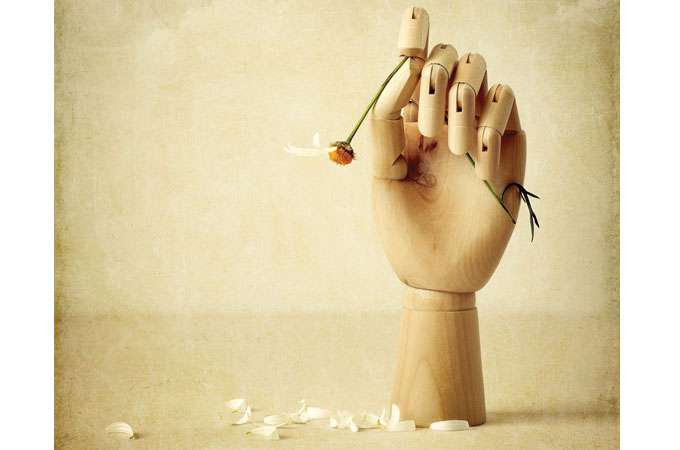 What a plant feels

In the early 1960s, Frank Salisbury was studying the chemicals that induce flowering in cocklebur (Zanthium strumarium), a weed found throughout North America and most notorious for its little football-shaped burrs, which are commonly found clinging to hikers’ clothing. To understand how the plant grew, Salisbury and his team of technicians at Colorado State University decided to measure the daily increase in leaf length by going out into the field and physically measuring the leaves with a ruler. To his bewilderment, Salisbury noticed that the leaves being measured never reached their normal length. Not only that, as the experiment continued, they eventually turned yellow and died. But the leaves on the same plant that were not handled and measured thrived. As Salisbury explained, “We were confronted with the remarkable discovery that one can kill a cocklebur leaf simply by touching it for a few seconds each day!”

As Salisbury’s interests lay elsewhere, a decade passed before his observation was put into broader context. Mark Jaffe, a plant physiologist who was based at Ohio University in the early 1970s, recognized that this touch-induced growth inhibition is a general phenomenon in plant biology. He coined the cumbersome term “thigmomorphogenesis” from the Greek roots thigmo- (touch) and morphogenesis (creation of shape) to describe the general effect of mechanical stimulation on plant growth.

Of course, plants are exposed to multiple tactile stresses such as wind, rain, and snow, and animals regularly come into contact with many of them. So in retrospect, it isn’t so surprising that a plant would retard its growth in response to touch. A plant feels what type of environment it lives in. Trees growing high on a mountain ridge are often exposed to strong winds, and they adapt to this environmental stress by limiting their branch development and growing short, thick trunks. The same species of tree grown in a protected valley, on the other hand, will be tall, thin, and full of branches. Growth retardation in response to touch is an evolutionary adaptation that increases the chances that a plant can survive multiple, and often violent, perturbations.

The mustard plant, Arabidopsis thaliana, that’s touched a few times a day in the lab will be much squatter, and flower much later, than one that’s left to its own accord. Simply stroking its leaves three times a day completely changes its physical development. While this change in overall growth takes many days for us to witness, the initial cellular response is actually quite rapid. In fact, Janet Braam and her colleagues at Rice University demonstrated that simply touching an arabidopsis leaf results in a rapid change in the genetic makeup of the plant.

That Braam discovered this phenomenon at all was quite serendipitous. Initially, as a young research fellow at Stanford University, she was interested not in the effect of touch on plants but rather in the genetic programs activated by plant hormones. In one of her experiments designed to elucidate the effect of the hormone gibberellin on plant biology, she sprayed arabidopsis leaves with this hormone and then checked which genes were activated by the treatment. She discovered several genes that were rapidly turned on following her spray treatment, and she assumed that they were responding to the gibberellin. But it turned out that their activity increased after they were sprayed with any number of substances—even water.

Not to be defeated, Braam pressed on, trying to figure out why these genes were activated even by water. She experienced a true eureka moment when she realized that the common factor in the treatments was the physical sensation of being sprayed with the solutions. Braam hypothesized that the genes she discovered were responding to the physical treatment of the leaves. To test this, she continued her experiment, but rather than spraying the plants with water, she simply touched them. To her satisfaction, the same genes that had been induced by spraying with the hormone, or with water, were also activated by touching the plants. Braam understood that her newfound genes were clearly activated by touch, and she aptly named them the “TCH genes” since they were induced by touching the plants.

We can feel a varied and complex mixture of physical sensations due to the presence of specialized mechanosensory receptor nerves and due to a brain that translates these signals into sensations with emotional connotations. These receptors enable us to respond to a vast array of tactile stimulations. A specific mechanosensory receptor called Merkel’s disks detects sustained touch and pressure on our skin and muscles. Nociceptors in our mouths are activated by capsaicin, the ultrahot chemical found in chili peppers, and nociceptors signal that our appendix is inflamed before an appendectomy. Pain receptors exist to enable us to withdraw from a dangerous situation or to let us know of a potentially dangerous physical problem inside our bodies.

While plants feel touch, they don’t feel pain. Their responses are also not subjective. Our perception of touch and pain is subjective, varying from person to person. A light touch can be pleasurable to one person or an annoying tickle to another. The basis for this subjectivity ranges from genetic differences affecting the threshold pressure needed to open an ion channel to psychological differences that connect tactile sensations with associations such as fear, panic, and sadness, which can exacerbate our physiological reactions.

A plant is free from these subjective constraints because it lacks a brain. But plants feel mechanical stimulation, and they can respond to different types of stimulation in unique ways. These responses do not help the plant avoid pain but modulate development to best suit the ambient environment. An amazing example of this was provided by Dianna Bowles and her team of researchers at the University of Leeds. Earlier research had shown that wounding a single tomato leaf leads to responses in the unwounded leaves on the same plant. These responses include the transcription of a class of genes called proteinase inhibitors in the intact leaves.

Bowles was curious to know more about the nature of the signal from a wounded leaf to an unharmed leaf. The accepted paradigm was that a secreted chemical signal was transported in the veins of a wounded leaf to the rest of the plant. But Bowles hypothesized that the signal was electric. To test her hypothesis, she burned one tomato leaf with a hot steel block and found that an electric signal could be detected in the stem of the same plant at a distance from the wounded leaf. The plant could still detect the signal even if she iced the stem-like structure that connects the leaf to the stem (called a petiole). She found that icing the petiole blocked chemical flow from the leaf to the stem—but not electrical flow. Moreover, when she iced the petiole of the burned leaf, the untreated leaves still transcribed the proteinase inhibitor genes. The leaf did not feel pain. The tomato responded to the hot metal not by moving away from it but by warning its other leaves of a potentially dangerous environment.

Of course, plants don’t “feel” in the traditional sense of the term. Plants don’t feel regret; they don’t get a feel for a new job. They do not have an intuitive awareness of a mental or emotional state. But plants perceive tactile sensation, and some don’t like to be touched too much.