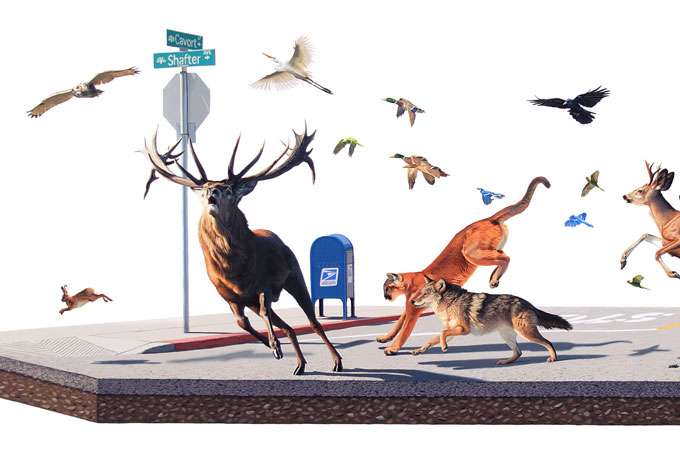 There Goes the Neighborhood

It is very likely that in the eastern U.S. today, more people live in closer proximity to more wildlife than anywhere else on Earth at any time in history. There are greater concentrations of wildlife elsewhere in the world, and they have been even greater in the past—but with fewer people around them. Likewise, human population densities are obviously higher in other places, but those densities have taken their toll on the wildlife in their midst.

In a world full of eco-woes, the wildlife abundance in the eastern U.S. should be wonderful news—unless, perhaps, you are one of more than 4,000 drivers who will hit a deer today, or your child’s soccer field is carpeted with goose droppings, or feral cats have turned your bird feeder into a fast-food outlet, or bears are looting your trash cans. In just a few decades we have turned a wildlife comeback miracle into a mess that’s getting messier, and costlier.

Reforestation began in nineteenth-century New England, when farmers started abandoning marginal pastures. Later, petroleum-based fertilizers and gasoline-powered machinery made Midwestern farming more productive and draft animals obsolete, freeing up 70 million acres that were being used to feed them. Many farmers, meanwhile, opted for jobs in town. Trees took back much of their land and, after World War II, nonfarmers began moving onto it.

Today, the eastern third of the country has the largest forest in the contiguous U.S., as well as two-thirds of its people. Since the nineteenth century, forests have grown back to cover 60 percent of the land within this area. In New England, an astonishing 86.7 percent of the land that was forested in 1630 had been reforested by 2007, according to the U.S. Forest Service. Not since the collapse of Mayan civilization 1,200 years ago has reforestation on this scale happened in the Americas, says David Foster, director of the Harvard Forest, an ecology research unit of Harvard University.

Before Columbus arrived, for example, a few million Native Americans and perhaps 30 million white-tailed deer lived in the eastern forests. Today in the same region there are more than 200 million people and 30 million deer, if not more.

Still, the idea of wildlife overabundance is difficult for many people to accept. Generations of Americans have grown up with a narrative of environmental loss. There are thousands of environmental and animal protection charities tugging at the heartstrings, and the narrative of loss spills out of virtually every envelope and email containing an appeal for funds. To look at a desktop full of these appeals is to come away convinced that the world is doomed.

It may well be. Make no mistake: All sorts of worthy battles are being fought to save the landscape and its wild inhabitants from the relentless growth of the human population; the natural resources it devours; the air, land, and water it befouls; and the climate it changes. The global environment has been seriously degraded in recent decades by increased human consumption of food, fresh water, timber, fiber, and fuel.

But a new kind of nature war has broken out that early conservationists never saw coming. While it is fashionable to say that most conflicts between people and wildlife are the result of human encroachment into wildlife habitat, it’s also true that critters have encroached right back—even species thought to be people-shy, such as wild turkeys and coyotes. (In Chicago alone, there are an estimated 2,000 coyotes.)

American communities are full of what writer Paul Theroux calls “single species obsessives.” I call them species partisans—people who choose a particular group or flock, or even individual animals, to defend. Each species has a constituency, be it geese, deer, bears, turkeys, beavers, coyotes, cats, or endangered plovers. Many people, of course, want to save all species. But often advocates for one creature square off against the saviors of another. Feral cat defenders, for example, belittle arguments of bird defenders who assert that cats kill native songbirds just to exercise their killing skills. Strange alliances form. Bird lovers side with hunters and trappers on the need for lethal control of cats, foxes, and other bird predators. Deer lovers and bow hunters join hands to keep out sharpshooters. Trappers align themselves with local governments, lobbying to reinstate outlawed traps to limit mounting damage by beavers.

For species partisans, these battles can be exciting, and they are often fought with self-righteous conviction. Arguments become shouting matches or lawsuits. Fights get nasty.

When officials in Clarkstown, New York, decided to rid their village of hundreds of Canada geese a while back, demonstrators turned up with TV crews to protest a pending “goose Holocaust.” When Princeton, New Jersey, hired sharpshooters to cull its deer population, the mayor’s car was splattered with deer guts, and the township’s animal control officer began wearing a bulletproof vest after finding his dog poisoned and his cat crushed to death. When coyote sightings in Wheaton, Illinois, increased dramatically and a resident’s dog was mauled by a coyote and had to be euthanized, the town divided into pro-coyote and anti-coyote factions. A nuisance wildlife professional, hired by the city council, discovered that a few residents were feeding the coyotes. He trapped and shot four of the animals, then began receiving voice-mail death threats. A brick was tossed through a city official’s window, and council members received threatening letters. The FBI was called in.

Ironically, the solution to our current predicament could be to manage nature more, not less. The default mode for many environmental activists has been to leave nature alone. In our new arrangement of man, beast, and tree, we need to find novel ways to manage our ecosystems for the good of all inhabitants—including people. ❧