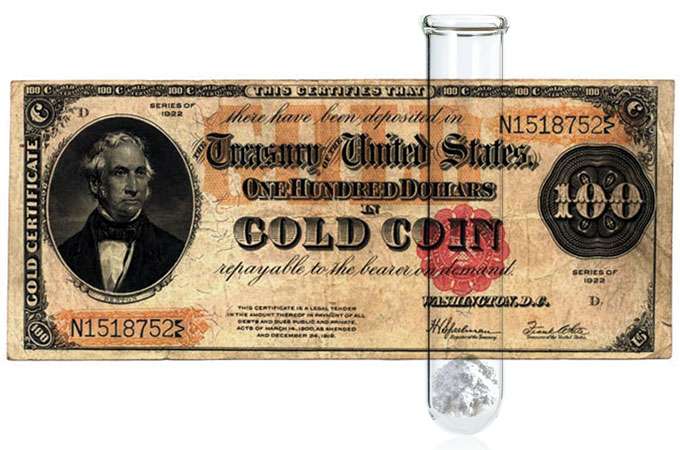 Gold mining with sugar instead of cyanide

One evening in October 2011, Zhichang Liu performed a simple chemistry experiment. Liu, a chemist at Northwestern University in Evanston, Illinois, wanted to investigate the properties of sugar molecules derived from starch by mixing them with a gold-containing solution. To his surprise, a pale brown suspension quickly formed. When he examined the brown chemical with a microscope, he saw long, thin needles.

Liu didn’t realize it at the time, but he had stumbled upon a green way to extract gold. Currently, most of the world’s gold is recovered from ore and electronic waste by using cyanides, which are extremely toxic to the environment. Cyanide that leaks from gold mining operations can contaminate rivers, wiping out fish and killing migratory birds that drink the water. Liu’s method relies upon a simple starch derivative that is not only nontoxic but cheap.

After Liu saw the needles, his team analyzed their structure more closely. Each gold atom, surrounded by four bromine atoms, sat on top of the circular sugar molecule like a saucer on a doughnut.

The sugar molecules were stacked into long tubes, which then bundled together to form a needle-like crystal, the researchers reported in Nature Communications. By adding another nontoxic chemical, Liu’s team could extract pure gold from the needles.

The researchers then tested the technique on a mixture containing gold and another metal, such as platinum or palladium. The sugar molecules selectively pulled out 78 percent of the gold and left most of the other metal behind. Liu’s team also could purify gold from tiny beads that contained gold, zinc, copper, and silver. The researchers are now working on scaling up the process for industrial use.