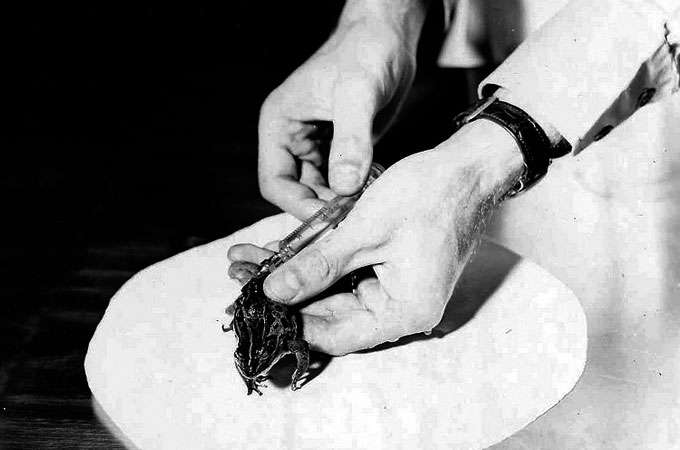 In the 1930s, South Africa began shipping frogs around the world for an unusual purpose: human pregnancy tests.

While it may seem bizarre compared to today’s tame practice of peeing on a stick, doctors used to test for pregnancy by injecting a woman’s urine into a South African clawed frog known as Xenopus laevis. If the woman was pregnant, the hormones in her urine prompted the frog to ovulate.

Now, a PLOS ONE study has revealed that this odd medical practice may have contributed to an ecological disaster. The research suggests that South African clawed frogs carried the deadly fungus Batrachochytrium dendrobatidis (Bd) to the U.S., devastating native frog populations.

Study coauthor Vance Vredenburg, a biologist at San Francisco State University, notes that the frog test was common from the 1930s to the 1970s; in fact, his mother used it to confirm her pregnancy with him. After improved techniques emerged, some hospitals simply released the unneeded frogs into the wild. “They said, ‘Well, there’s a pond right out there—why don’t we just let the poor little guys go?’” says Vredenburg.

Scientists later discovered that the Bd fungus had triggered massive amphibian declines worldwide, and they wondered where the pathogen had come from. One study suggested that South African clawed frogs, which don’t die from the fungus, were infected as early as the 1930s and might have spread the disease to other frog species across the globe.

Vredenburg decided to investigate whether Xenopus populations in the U.S. carried the pathogen. His team tested 23 Xenopus specimens collected in California from 2001 through 2010 for the fungus’s DNA. Three specimens came back positive for Bd, suggesting that X. laevis was indeed a carrier.

The results don’t prove that X. laevis brought the fungus from South Africa to the U.S., says Vredenburg. But the study adds to the circumstantial evidence by showing that the species is capable of harboring the pathogen in California’s climate. To bolster the case, researchers may need to compare the genome of the fungus carried by X. laevis in the U.S. to that of the strain seen in South Africa.