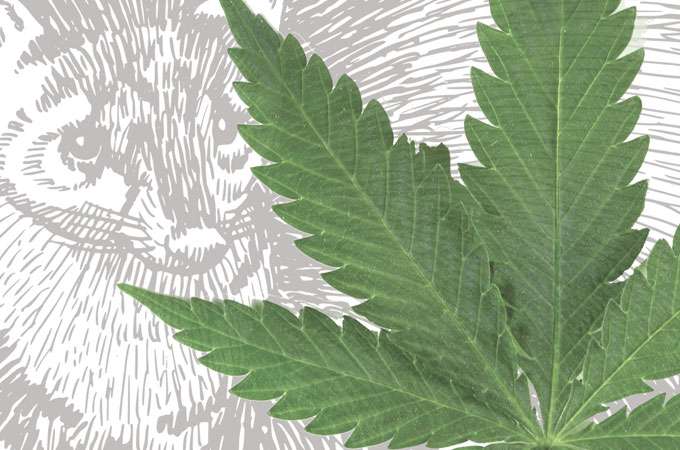 The marijuana industry may seem far removed from the world of carnivore conservation. But scientists have discovered that in the remote reaches of California’s Sierra National Forest, pesticides on illegal pot farms are poisoning threatened animals called fishers, members of the weasel family.

The first clues emerged in 2009, when researchers found a male fisher in the Sierras that “for all appearances seemed to be healthy, except for the fact that he was lying dead on the ground,” says Craig Thompson, a research ecologist at the USDA Forest Service in Fresno, California. Tests at the University of California, Davis, revealed the animal had died from ingesting rat poison.

While pesticide poisoning is widespread among wildlife, it usually occurs near developed areas such as farms or suburbs. This fisher, which researchers had tracked using a radiocollar, had spent its life in the forest. “We started wondering, where in the world did he get hold of this?” says Thompson. Analysis of archived liver tissue from other dead fishers found in the area turned up signs of rat poison in 79 percent of the animals, the team reported in PLOS ONE.

The researchers began to suspect that people were using rodenticides illegally in the Sierras. After consulting with law enforcement officials, they learned that clandestine marijuana farms in the forest used huge amounts of pesticides. Fishers might prey on other animals poisoned with the chemicals or even eat the pesticide-laced bait itself.

Thompson and his colleagues worried that rodenticide exposure could hinder fisher recovery. These secretive, housecat-sized animals, heavily hunted in the late 1800s and early 1900s, have struggled to make a comeback in the western U.S. While rat poison might not kill a fisher outright, it could partly paralyze the animal or slow down its reflexes, making it more vulnerable to predators.

But the team needed evidence that the pot gardens were responsible. Monitoring active farms, which are often manned by armed guards, was too dangerous. Instead, the researchers compared the locations of 315 marijuana farms found over the past decade with the home ranges of 46 female fishers that had been tracked with radiocollars and later died.

Female fishers whose home ranges contained many pot cultivation sites were more likely to die young, the team later reported in Conservation Letters. (Male fishers weren’t included in the analysis because they cover such a wide area that nearly all are exposed to rodenticides.) Thompson’s team is now studying whether mountain lions and bobcats also are suffering from rodenticide poisoning.

Gabriel, M.W. et al. 2012. Anticoagulant rodenticides on our public and community lands: Spatial distribution of exposure and poisoning of a rare forest carnivore. PLOS ONE doi:10.1371/journal.pone.0040163.