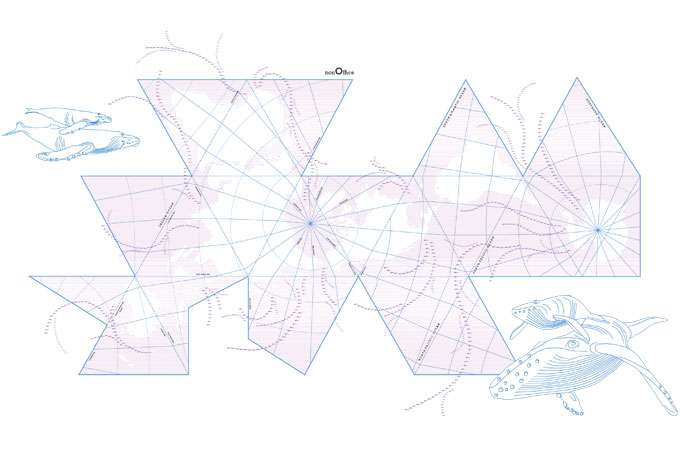 Seventy years ago, Buckminster Fuller’s icosahedral “Dymaxion Map” (or Fuller Projection Map) first appeared in Life magazine. The innovator and technologist, perhaps best known for inventing the geodesic dome, developed this projection of the earth so that land masses were distorted very little and no continents were split. By depicting the planet as one island in one ocean, Fuller aimed to highlight the connectedness of humanity. This idea is in keeping with Fuller’s commitment to using technology and design to improve human lives in an ever-changing world.

In honor of Dymaxion’s anniversary, the Buckminster Fuller Institute put out a call to designers, artists, and citizen cartographers to “create a new and inspiring interpretation” of the map. More than 300 people from 42 countries registered for the “Dymax Redux” contest, and the winners were announced in August.

Belgium-based architect and graphic designer Jonathan Robert Maj chose to shift the focus of the map from land to sea; he charted the astounding migration patterns of humpback whales. The resulting map, titled “(W)igrations” (above), is one of 11 finalists in the competition. An exhibition later this fall at the Cooper Union for the Advancement of Science and Art in New York City will showcase all the finalists’ work. Meanwhile, explore the maps at bfi.org/mapcontest.