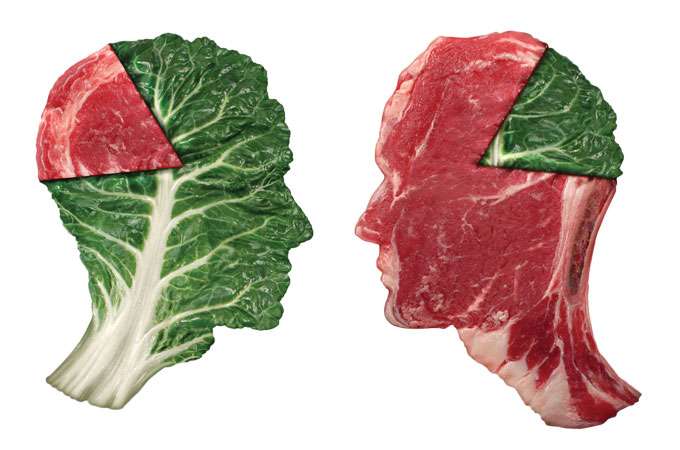 The recipe: Shift the meat-to-plant ratio

Can farmers feed an additional 4 billion people with current levels of crop production? A team from the University of Minnesota tackled the problem by shifting the definition of agricultural productivity from the standard measure (tons per hectare) to the number of people fed per hectare. They then audited the global caloric budget and found a way to squeeze out another 4 quadrillion calories per year from existing crop fields. 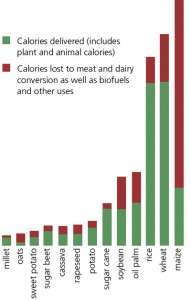 Their starting point was meat production, the most inefficient use of calories to feed people. The energy available from a plant crop such as corn dwindles dramatically when it goes through an intermediate consumer such as a pig. Beef has the lowest caloric conversion efficiency: only 3 percent. Pork and chicken do three to four times better. Milk and eggs, animal products that provide us essential nutrients in smaller batches, are a much more efficient use of plant calories.

The researchers calculated that 41 percent of crop calories made it to the table from 1997 to 2003, with the rest lost mainly to gastric juices and droppings of livestock. Crop calorie efficiency is expected to fall as the meat market grows. Global meat production boomed from 250.4 million tons in 2003 to 303.9 million tons by 2012, as reported by the FAO. Rice production, mainly for human food, dwindled by 18 percent over the same time period. The authors of the 2013 paper, published in Environmental Research Letters, suggested a trend reversal would be desirable. They estimated that a shift from crops destined for animal feed and industrial uses toward human food could hypothetically increase available calories by 70 percent and feed another 4 billion people each year.

Of course, food security is also a problem of distribution—not just production. Seventeen percent of densely populated India is undernourished, even though per capita meat consumption and production are relatively low. In contrast, fewer than five percent of people in the U.S., where 22 percent of the world’s beef is raised, are at risk of going hungry. Nevertheless, the potential for us to provide sufficient nourishment to everyone by curbing consumption of a luxury item should be reassuring, at least to vegetarians.