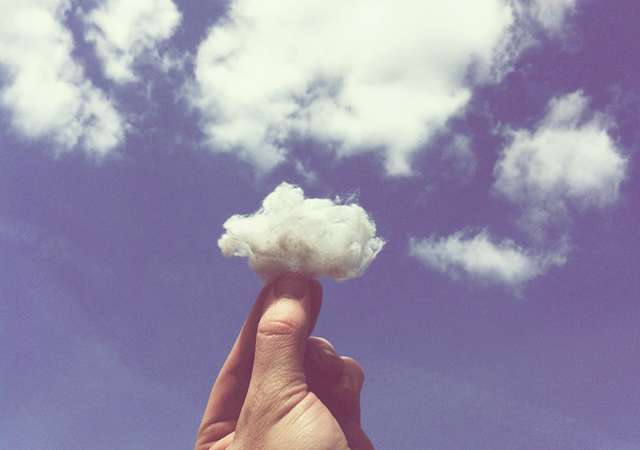 We Are as Gods. We Might as Well Get Good at It.

Humans are not particularly good at creating some new bit of technological wizardry and then saying, “Wait; that looks dangerous. No, thanks.” Geoengineering brings us face to face with this particular human foible. Should we intentionally tinker with the climate so as to counteract the previous 200 years or so of unintentionally tinkering with the climate? In a new book, A Case for Climate Engineering, Harvard physicist David Keith argues convincingly that, at the very least, we need to understand it better if we’re going to dive in at all.Keith admits that at its absolute worst, geoengineering has an even greater destructive potential than all the world’s nukes combined. But he argues that the technology’s potential upsides demand serious, scientific scrutiny. In fact, such deliberate research may be our best hope that humanity might step back from our latest technological precipice—or go forward responsibly.

To date, the overarching theme of geoengineering discussions has been caution—extreme caution. Only a handful of scientists around the world are actively engaged in research on the topic. And the few physical experiments—or even the suggestion of such experiments—have been met with some combination of rage, derision, and fear. The arguments against geoengineering generally fall into two camps: first, the idea is too unknown—too big an experiment on too big a system—to really understand where the risks lie. And second, if the technology were to actually work, it would give the world an excuse to keep on emitting greenhouse gases and delay necessary deep cuts in emissions. 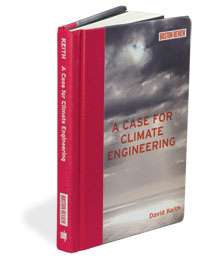 Keith does not shy away from these problems. In fact, even in a book whose very title advocates geoengineering, the author is about as cautious as one can be. The “case” Keith makes is just for research, not deployment. He says that a full-scale research program would remove taboos and address whether engineering the climate really is an option for a world that is rapidly running out of them. And if there is anyone in this field the world should listen to, it is David Keith. Holding Harvard appointments in both applied physics and public policy, he has engaged with geoengineering issues for more than two decades. His book is underscored by that long experience: he navigates seamlessly from the science involved to the ethical quandaries it creates.

Keith focuses specifically on a type of geoengineering known as solar radiation management or SRM. This involves injecting tons of tiny particles (sulfate aerosols) into the stratosphere to reflect sunlight away from the earth, thus cooling it down. Volcanoes do this naturally: the commonly cited example of recent years is Mount Pinatubo’s 1991 eruption, which caused a drop in global temperature of half a degree. Keith’s proposed research program moves beyond computer modeling to actual physical testing; researchers would experiment initially with only a few tons of sulfates, then ramp up slowly and carefully.

But there is a problem with geoengineering research, one that Keith briefly touches on but which may be the most fundamental issue of all: the idea of “institutional lock-in.” Lock-in means that once we invest time and money on a technology, that technology develops an inertia that’s hard to slow, even in the face of contrary evidence. Keith proposes methods for staving off lock-in, including norms and rules for research, bans against patents for the technology, and safeguards against monopolies on the research effort.

But the scariest thing about geoengineering is that we can do it easily, cheaply, and almost immediately. Keith writes that for only about $1.5 billion per year, 20 existing aircraft retrofitted with military engines could lug tons of sulfates to an altitude over 50,000 feet; this could offset about half of the warming we’re causing with carbon emissions. “The cost of geoengineering the entire planet for a decade could be less than the $6 billion the Italian government is spending on dikes and movable barriers to protect a single city, Venice, from climate change–related sea-level rise,” Keith notes. That is frighteningly cheap when governments confront the potential to lose trillions of dollars because of climate change.

China probably has a few billion dollars lying around that it could spend on some climate-tinkering. So, certainly, do Russia, India, and any number of other countries that are increasingly worried about global warming. As Keith points out, the Alliance of Small Island States, which includes low-lying climate bellwethers such as the Maldives and Vanuatu, could band together and spend less than one percent of its countries’ collective GDP to get geoengineering going—a small price to pay when the alternative is to disappear beneath the waves.

So if it is easy, and it is cheap, and we have reason to believe that it might work, are we already locked in? Eli Kintisch, author of the 2010 book Hack the Planet, has called geoengineering “a bad idea whose time has come.” Do books such as Keith’s and Kintisch’s, along with the growing realization that it might be far too late to mitigate the disaster by cutting emissions, suggest we have already stepped off this particular cliff? It’s an impossible question to answer definitively, since virtually no geoengineering has occurred as yet.

In one exception, an American businessman dumped huge amounts of iron sulfate into the Pacific Ocean in a bizarre attempt to create a plankton bloom and absorb carbon dioxide from the atmosphere. He was roundly ridiculed—and perhaps awakened some to the potential for “rogue” geoengineers. But in a way, the possibility that we’re sliding down a greased ramp toward large-scale geoengineering makes Keith’s call for a global research program even more convincing. If we’re going to tinker with the climate, let’s at least figure out what we’re doing first.

Of course, there are plenty of reasonable arguments to pull back from the idea entirely and focus all our efforts on mitigating climate change by cutting our emissions to zero. Alan Robock, a Rutgers professor who has been particularly vocal against geoengineering, outlined 20 reasons not to do it, including questions of moral authority and the potential for simple human error. (1) The international Convention on Biological Diversity has condemned all “geoengineering activities,” citing an “absence of science-based, global, transparent and effective control and regulatory mechanisms.”

Nevertheless, the larger scientific community is starting to pay attention to geoengineering research. In September 2013, it was revealed that the Russian government pushed the Intergovernmental Panel on Climate Change to include discussion of geoengineering in its newest report. Responding with a single paragraph in its report released September 27, the IPCC recognized the ability of solar radiation management to “substantially offset a global temperature rise” but added that this would do nothing to combat climate change’s dangerous cousin, ocean acidification. Further, terminating the program abruptly would likely cause a very rapid rise in temperature. In other words: once we start, it will be a very bad idea to stop. The IPCC concludes with the ominous call to heed the unknown unknowns: “[Carbon dioxide removal] and SRM methods carry side effects and long-term consequences on a global scale.”

The arguments against geoengineering are convincing, but as many observers have pointed out, we have been conducting a 200-year geoengineering experiment since the start of the Industrial Revolution. As the seas continue to rise, and as the truly disastrous effects of a warming climate begin to manifest themselves, the urge to apply a quick technical fix may prove too much to resist.

Dave Levitan is a freelance journalist based in Philadelphia who writes about energy, the environment, and health. His articles have been published by Scientific American, Yale Environment 360, Grist, and many others.

Story update: Could geoengineering take the rain out of the rainforest?