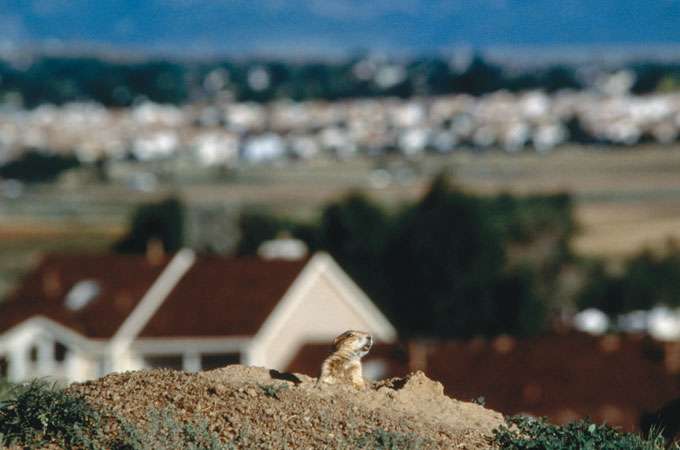 Cities are one of the fastest growing habitat types for people—and wildlife. And increasingly diverse urban ecosystems are inspiring creative living arrangements.

To the human eye, a city looks like unpromising habitat for wildlife: a jumble of asphalt, chain link, and scraggly weeds—hardly fit even for a starling.

But animal species often have a more complex view of our homes than we do. Cities “have more diversity than people think,” says Seth Magle, director of the Urban Wildlife Institute at Chicago’s Lincoln Park Zoo and one of a small but growing band of ecologists studying the animals that have carved out niches in the concrete jungle. “The closer we look, the more species we find in cities,” he adds.

Take, for example, the prairie dog, which thrives in towns-within-towns all along the Front Range of the Rocky Mountains in Colorado. “We like to grow a lot of grass in cities, and prairie dogs like to eat a lot of grass,” says Magle, whose graduate research focused on urban prairie dog colonies.

On the open range, prairie dogs act as a keystone species, and Magle found that they retain at least part of that role within cities as well. By eating grasses, prairie dogs encourage the growth of forbs and decrease the litter layer in patches of vegetation around their colonies, meaning that these rodents shape the urban environment as surely as humans do, if more subtly.

Such findings illustrate why ecologists are starting to sit up and take notice of urban wildlife, and this alertness comes not a moment too soon. Cities are, after all, one of the world’s fastest growing types of habitat—and some of the most rapidly expanding cities are located near biodiversity hotspots. “If we’re going to conserve all these species that we want to conserve, we’re going to have to work in the cities too,” Magle says.

Nice Habitat If You Can Get It 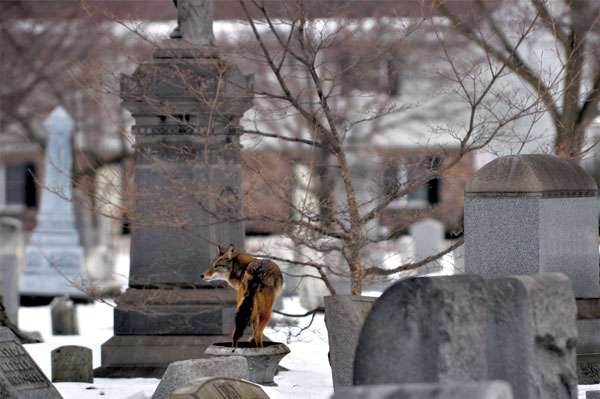 More and more species are beginning to migrate to cities as habitat outside urban areas shrinks, or they simply learn how to get along in closer proximity to humans.

Coyotes, for example, were rarely spotted in Chicago before the 1990s, but now an estimated 2,000 make their home in the city and its environs.

The animals have become savvy and street-smart—literally. Some have been observed looking both ways before crossing the street. Coyotes living in Chicago’s urban core “may cross over a hundred roads in a 24-hour period,” says Stan Gehrt, assistant professor of environmental and natural resources at Ohio State University, who has been studying Chicago’s urban coyotes since 2000.

It’s no surprise that cars are by far the major danger to these animals. Even so, Gehrt has found that survival and reproductive rates are higher among coyotes in urban than in rural areas, largely because of the lack of hunting and trapping in the city.

Urban coyotes are almost completely nocturnal, keeping mostly to patches of out-of-the-way green space in places such as cemeteries and retention ponds. “A coyote in an urban setting is trying to hide and escape people, while still living among them,” Gehrt says.

It can still be an uneasy coexistence. Gehrt tells a story that seems to encapsulate the complexities of learning to share our habitat with a new suite of wildlife species:

A pair of coyotes was raising a trio of pups in a Chicago-area cemetery. The cemetery owners brought in a goose-control company that used a dog to harass a flock of Canada geese that had also taken up residence there. (The geese, too, are relatively new arrivals to urban areas, drawn by our fondness for creating broad, grassy habitat similar to the tundra where they nest.)

At one point, the dog ran, unknowingly, straight for the coyotes’ den, and the protective parents chased the dog away. The dog’s terrified owners declared that they wouldn’t come back until the coyotes had been removed. And that was a death sentence for the coyotes.

The coyote pair was among Gehrt’s favorites, and he still feels the loss. “If they had just been patient, the coyotes would have helped take care of the geese, too,” he laments. “They didn’t understand how coyotes work.”

Evolution in the City 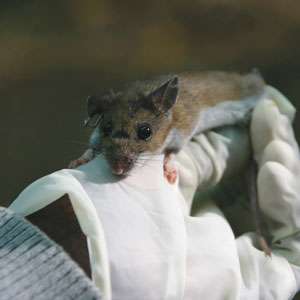 “Cities are really extreme environments for a lot of species,” says Jason Munshi-South, associate professor of biology at Fordham University. Cities have dense populations and abundant resources, he explains. “It’s a very interesting evolutionary situation where you expect there to be magnified selection pressures and evolution to be operating fairly rapidly.”

Munshi-South studies the genetics of the white-footed mouse, a species found in even the smallest patches of urban forest throughout New York City. These mostly isolated populations have already begun to diverge from each other after just a few hundred years of urbanization. “With a few genetic markers you can identify mice from different parks,” Munshi-South says. It’s as if the Olmsteds and their successors had wrought a new kind of Galápagos.

A study comparing the genes of urban and rural white-footed mouse populations finds that natural selection, not just chance, is at work in creating these changes. Munshi-South and his colleagues found that urban mice show differences from rural mice in genes related to immune system function, detoxification of heavy metals and other chemicals, and spermatogenesis—the last suggesting that urban parks may be a kind of mouse meat market, with increased competition for mates. 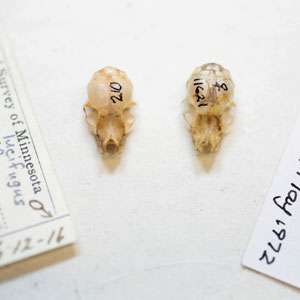 Urban populations of white-footed mice also show larger cranial capacity than rural populations, according to research that drew on 100 years’ worth of museum specimens representing ten small mammal species. The meadow vole shows the same pattern, and the big brown bat and masked shrew may do so as well. University of Minnesota biologists Emilie Snell-Rood and Naomi Wick, who conducted this study, say these results suggest that a bigger brain—and perhaps greater cleverness—is an advantage in the city. 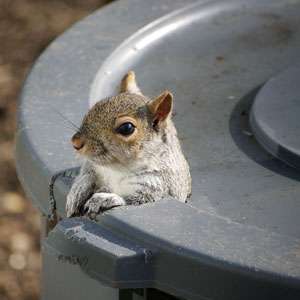 Researchers are documenting changes in animal behavior brought about by city life. Compared to their rural cousins, for example, squirrels in urban areas are more aggressive with one another—and bolder. “They’ve gotten to the point where they don’t even see humans as a threat anymore,” says urban ecology researcher Tommy Parker. Similar patterns have been observed across a variety of species and have been dubbed “urban wildlife syndrome.”

Another factor that profoundly shapes the behavior of urban wildlife is sound. “Basically, cities generate a lot of noise,” says Madhusudan Katti, associate professor of vertebrate biology at California State University, Fresno. And so, for example, city-slicker squirrels rely more on flicks of the tail to communicate with one another and less on vocal warning calls, compared to rural populations of their species. 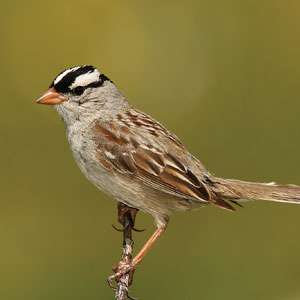 “A lot of the noise in cities tends to be low-pitch, low-frequency,” Katti adds—think, for example, of the rumble of big trucks over asphalt. He and other scientists have found that many bird species sing louder in cities and also shift to high notes that are more likely to be heard over city noises.

Cities can also change the structure of birdsong. The white-crowned sparrow, common throughout much of North America, has a song consisting of a whistle, a buzz, and a trill at the end. Katti wondered whether these “vocal gymnastics” would carry in a noisy urban environment.

So he and his collaborators recorded sparrow songs across a rural-urban gradient. “We were predicting that song components might become simpler” in cities, he says.

That’s exactly the case: song structure is closely correlated with background noise levels, they found. “What seems to be happening is, all these high-modulation components are tending toward more of a whistle,” Katti says. 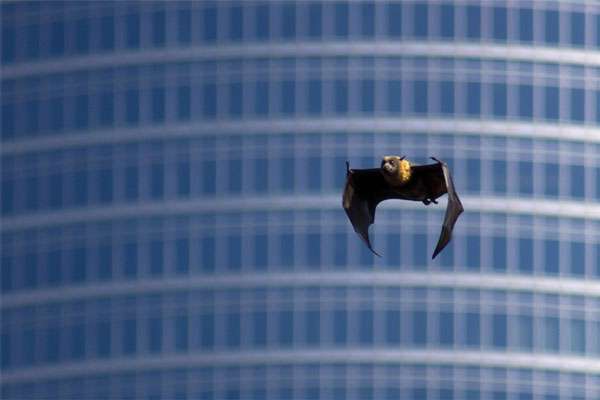 As our awareness of the variety of species that can thrive in urban areas expands, some ecologists are beginning to wonder whether cities could serve as refugia for endangered species.

In fact, in some cases cities are already doing so. Gray-headed flying foxes, a threatened species, established a permanent camp near the Royal Botanic Gardens of Melbourne, Australia, in 1986. By 2003, the colony had grown to nearly 30,000 individuals.

Scientists at the Australian Research Centre for Urban Ecology determined that the bats have been able to survive in the city because of a surge in interest in native plants over recent decades. More than 87 tree species that provide food for flying foxes are found in Melbourne—far more than were present before the founding of the city—and provide abundant year-round sustenance for the bats.

Ultimately, the botanic gardens couldn’t host the flying foxes, which can carry disease in addition to being noisy and smelly in such large numbers. Scientists and volunteers carefully herded the colony to a new location a few kilometers away, where the bats have remained for the past decade.

Birds are drawn to cities for similar reasons. “It’s almost a general pattern emerging in studies across cities that the abundance of many bird species or whole bird communities is higher in cities than [in] surrounding natural habitats, which is an indication of higher levels of food availability,” says Madhusudan Katti.

Katti and others have also found that within urban areas, bird diversity is directly related to water use. Especially in arid landscapes such as the western U.S, our greedy use of water to create lushly manicured lawns, orange groves, and golf courses can be a boon for bird species. “I think of these as pseudo-riparian habitats,” Katti says. 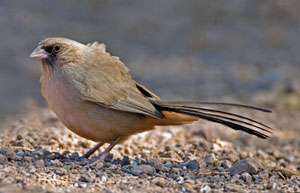 Abert’s towhee, a small songbird restricted to a narrow range in the Sonoran Desert of the southwestern U.S., is rarely glimpsed in Tucson—where water is expensive and landscaping emphasizes native, low-water plants. But in green and profligate Phoenix, the bird is so common as to be unremarkable.

“So you have an endemic species whose native habitat has been destroyed to the point where we’re a little bit worried about it, and it loves urban habitats where water is wasted,” says Katti. “What are you going to do?”

Sharing our cities with threatened and sensitive species is likely to bring up other dilemmas and paradoxes. For example, while birds and bats are highly mobile and can easily exploit the new resources humans create, other wildlife might need help getting to suitable patches of urban habitat. We may find ourselves herding mice, salamanders, and snakes—as well as bats. Still, these stories suggest that it’s time to take the question seriously: Can we conserve by cohabiting?