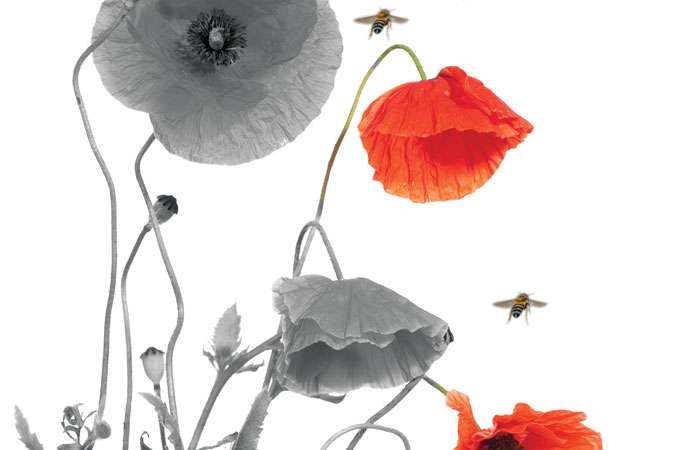 Air pollution may be giving bees the equivalent of a stuffed-up nose. According to a study in Scientific Reports, diesel exhaust distorts the scents of flowers—and as a result, honeybees could have trouble sniffing out plants to pollinate.

By some estimates, about 35 percent of the world’s food crop must be pollinated. This service, worth about $208 billion per year, is often performed by honeybees. These bees “have a sensitive sense of smell and an exceptional ability to learn and memorize new odors,” which helps them find flowers, the team writes.

Wondering whether air pollution might interfere with this process, the researchers conducted several experiments. First, they created a synthetic odor using eight chemicals found in the natural scent of oilseed rape flowers. Then they put the synthetic mix into glass bottles filled with clean air or diesel exhaust.

In the polluted bottles, two of the scent chemicals “were rendered undetectable” in one minute, the team reports. But in the clean bottles, all the odor components could still be detected after two hours. And levels of some chemicals in the diesel-exhaust bottle dropped lower than those in the clean bottle.

The team then did an experiment using nitric oxide and nitrogen dioxide, which are part of diesel exhaust. When those gases were mixed with the synthetic odor, the levels of two scent chemicals fell by 90 and 97 percent, and one couldn’t be detected at all.

Finally, the team trained honeybees to extend their proboscises when they smelled the synthetic odor. When the researchers removed one of the chemicals from the mix, the bees had a harder time recognizing the scent—even though that chemical had made up only 0.8 percent of the mixture.

Though bees can also identify flowers by sight, tracking odors is important when the flowers are farther away.