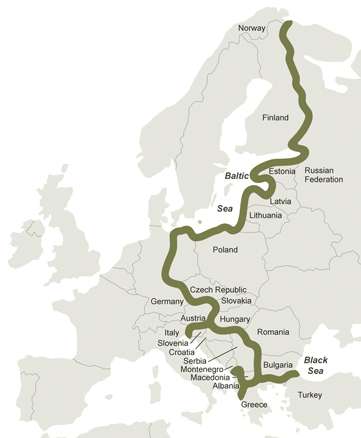 From Death Strip to Lifeline

The Iron Curtain divided the European continent for over 40 years. Although tensions ran high during that time, wildlife in the vicinity of the dividing line found refuge. The border region, largely off-limits, saw little agriculture or development; thus large swaths of undisturbed natural habitat containing many threatened species were left behind. In other words, here the “border effect” existed on a massive scale.

Today, with Europe peacefully reunited, the wildlife living near the former borderline still stands a chance at survival. That’s in large part due to a multinational effort known as the European Green Belt Initiative, which arose in 2003 to protect and connect habitat along the old dividing line.

The Green Belt runs thousands of kilometers—from the Barents Sea at the Russian-Norwegian border, along the Baltic Coast, through Central Europe and the Balkans, to the Black Sea. It connects 24 countries, runs through 40 national parks, and comes within 25 kilometers of more than 3,000 protected areas. From old-growth boreal forests and taiga in the north to coastal and marine habitats in the Baltic region to the steppes in the south, it crosses nearly all of Europe’s biogeographic regions and acts as an ecological corridor for wolves, bears, lynx, and other wildlife. On the 1400-kilometer stretch in Germany alone, a survey by German conservation NGOs found more than 600 animal and plant species on the IUCN’s Red List.

The European Green Belt Initiative also focuses on bringing sustainable development and tourism to the area. One project that fits into these goals is the Iron Curtain Trail, a 6,800-kilometer-long cycle path that brings visitors close to historical, cultural, and ecological highlights.


<< Return to “Where Humans Fear to Tread”