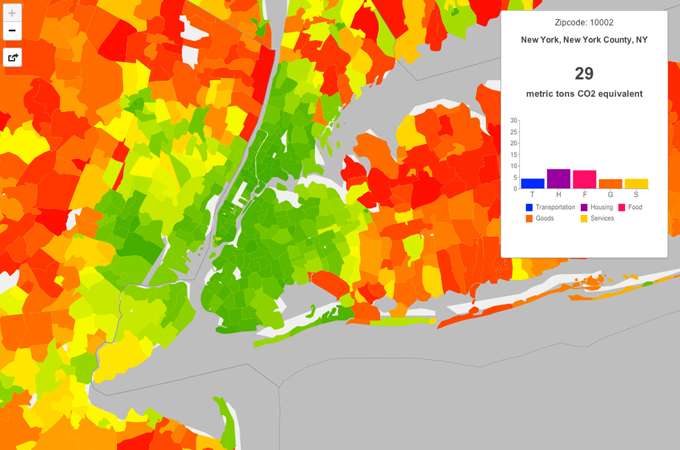 The researchers estimated household carbon footprints for ZIP codes across the country, accounting for factors such as electricity use, number of cars, housing structure, and demand for consumer goods. In cities, the average household’s carbon footprint was about 40 tons of CO2-equivalent emissions per year. But in the suburbs—where residents own more cars, live in bigger homes, and buy a lot of goods—the average footprint was about 50 tons.

The authors also found that increasing density doesn’t always reduce emissions. While the most crowded urban cores had lower carbon footprints, denser suburbs actually had bigger footprints because residents tended to be wealthier, driving up their emissions from energy usage, transportation, and consumption of goods and services.

Finally, the team found regional disparities in emissions sources—suggesting that a one-size-fits-all solution may not work. For instance, the Midwest and South generate more emissions from electricity, so cutting household energy use could make a big difference. But in California, reducing transportation-related emissions might yield the biggest rewards.

Image (above): The CoolClimate Network tool allows users to calculate their carbon footprint and see how it compares to that of their neighbors.