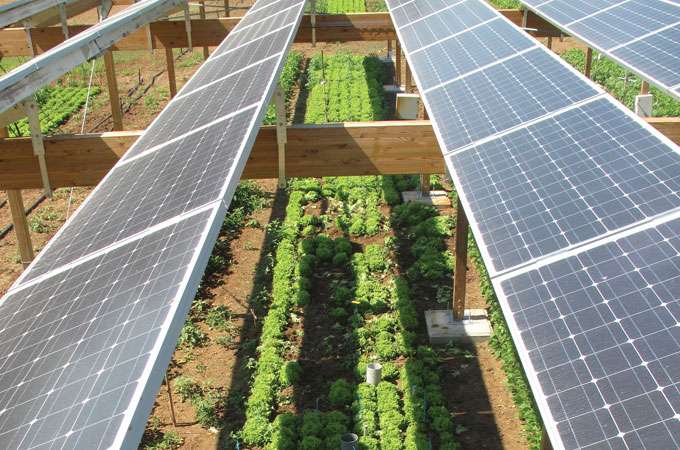 Farming food and fuel, side by side

What is the best way to utilize sunlight—to grow food or to produce fuel?

For millennia, the answer was easy: we used solar energy to grow plants that we could eat. Then, in the 1970s, the answer became more complex as fields of photovoltaic panels (PVPs) began popping up all over the planet, sometimes on former farmland. In the 1990s, farmers began growing food crops for fuels such as corn-based ethanol. The problem is that the food-fuel equation has become a zero-sum game.

That led French agricultural scientist Christian Dupraz to ponder whether both food and fuel production could be successfully combined on one plot of land. For example, why not build solar panels above a farm field so that electricity and food can be produced simultaneously? In addition to resolving the conflict between land uses, solar panels would provide an additional source of income to farmers while at the same time sheltering crops from the rising temperatures and destructive hail and rain storms associated with climate change.

The researchers assumed crop productivity would decline in the shade, since plants would have to compete with solar panels for radiation and possibly water. But they also wondered whether, in a warming world, shade might actually improve crop productivity. “Shade will reduce transpiration needs and possibly increase water efficiency,” Dupraz wrote. The key would be finding the right balance between electricity produced by the solar panels and productive capacity of the farm.

At the end of three growing seasons, the researchers found that compromise was indeed possible. Not surprisingly, the crops under the full-density PVP shading lost nearly 50 percent of their productivity, compared to similar crops in the full-sun plots. However, the crops under the half-density shading were just as productive as the ones in the unshaded control plots; in a few cases, they were even more productive. (1)

The reason for this surprising outcome, according to Hélène Marrou, who studied lettuce in the plots, was the ability of plants to adapt to lower light conditions. She reported that lettuce plants adjusted by increasing their leaf area and by altering leaf arrangement to harvest light more efficiently.

She also had good news to report on the water front. “We showed in this experiment that shading irrigated vegetable crops with PVPs allowed a saving of 14 percent to 29 percent of evapotranspired water, depending on the level of shade created and the crop grown,” she wrote in a 2013 paper. (2) Within the context of global warming and water shortage, she said, reducing water demand by shading plants could represent a big advantage in the near future.

This article has been adapted from Grass, Soil, Hope by Courtney White, published by Chelsea Green, 2014, ©Courtney White.