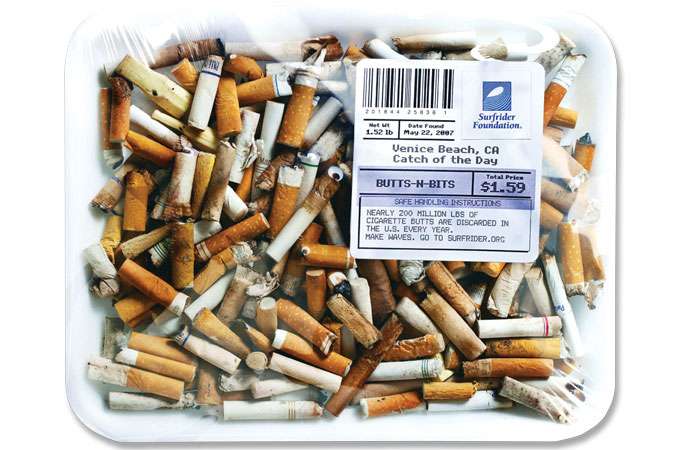 Too Many Butts on the Beach

With smokers flicking an estimated 4.5 trillion cigarette butts into the ecosphere each year, it’s time take a tougher stand against the toxin-laden litter, researchers say. The paper tubes are essentially mini Superfund sites laced with pesticides, heavy metals, and formaldehyde, explain Thomas E. Novotny and Elli Slaughter of California’s San Diego State University in Current Environmental Health Reports. Especially problematic are the plastic filters found on many cigarettes (which manufacturers have long suggested—falsely—make tobacco safer). The filters accumulate toxins and can leach chemicals for a decade. As a result, tobacco waste carries a high potential for contamination, as millions of tons of butts end up on sidewalks, roadsides, and beaches. Indeed, cigarette litter is the single largest category of trash collected during coastal cleanups, accounting for 19 percent to 38 percent of the global total. And butts soaked in water for just an hour or so, studies show, release chemicals that wreak havoc with insect larvae and fish.

Despite such worrying results, regulators don’t see a smoking gun. Butts are “unlikely to be thought of as a toxic waste,” the pair writes, so reducing the threat will require “novel environmental interventions and new partnerships between tobacco control and environmental groups.” Gentler approaches could include using ads to educate smokers about the toxicity threat and to persuade them to drop their butts into trash cans. But the researchers suggest more radical regulation should be on the table, too. Governments could ban filtered cigarettes, for instance, or require tobacco companies to take back their butts and pay for the cost of cleanups. Environmental groups could even sue for ecological damages.