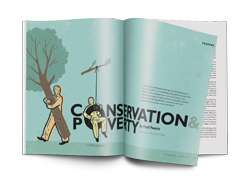 Ever since conservationists started to marry protected area management with social programs, the relationship has been rocky and ill-defined. In “Conservation and Poverty” (Conservation, Spring 2011), Fred Pearce explored economic advancement in biodiverse regions.

A recent study looked at communities in Costa Rica whose welfare improved after protected areas were established nearby. (1) Economists found that tourism and recreation were the most important contributors to poverty reduction in those communities. In fact, increased tourism and recreation accounted for nearly two-thirds of the positive impact. In contrast, infrastructure upgrades and ecosystem services contributed very little.