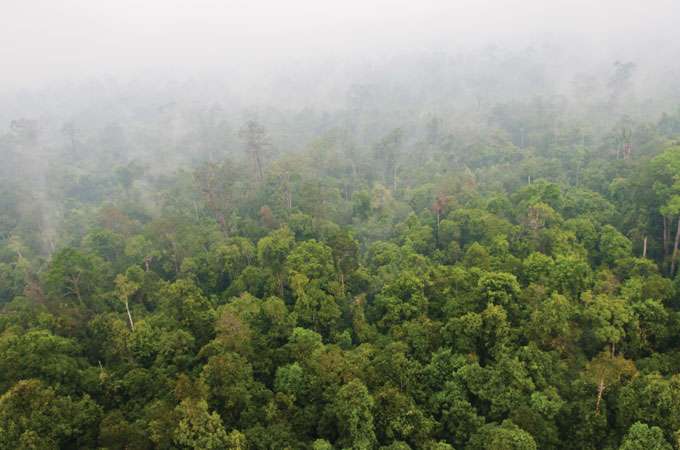 Watchmen of the Global Forest

In February, the World Resources Institute launched the first interactive, regularly updated map of the world’s forests. Two years in the making, the Global Forest Watch Web service integrates terabytes of data from a vast archive that includes multiple satellite feeds. It builds on detailed maps of forest change published two years ago in Science by Matthew Hansen of the University of Maryland, Rebecca Moore of Google, and others. (1) Visitors can view recent aerial imagery overlaid with graphics revealing where trees were felled or regrew plus the boundaries of protected areas, biodiversity hotspots, and concessions for logging, mining, or other commercial uses—all plotted at up to 30-meter resolution and updated annually. Using a timeline on the map, you can replay the history of a forest since 2001. Large fires are also tracked and their positions updated daily.

The service should be a boon to forestry and academic research. “But our intention is to make this a world-class crowdsourcing platform as well,” says Nigel Sizer, the project’s director. “You’ll be able to go to the website and draw a polygon to select an area, then put in an email address and get an email alert any time something changes.” Since the site’s launch, says James Anderson, the communications director at WRI, users have begun sharing map views via social media and annotating the site with their own photos and stories of forest recovery—or mismanagement.

Anderson says that DigitalGlobe, a private company that sells very high-resolution satellite images, aerial photos, and other geospatial data, has promised to aim some of its orbiting cameras at areas of particular interest to WRI. “This summer they are going to photograph land-clearing fires in Indonesia with 50 centimeter–resolution images—detailed enough that you can see individual trees and the edge of the fire lapping against the forest,” he says.

Pictures like this can have a powerful impact. The annual haze that drifts over Indonesia and into neighboring countries each spring and summer is already a source of political tension. This past March, Anderson says, “Fires in Sumatra sent up smoke so thick that [it] wafted over Singapore and almost completely shut down the city for a week.” Using the Global Forest Watch tool, Sizer and his colleagues produced an interactive map showing that more than half the fires in Sumatra were set on concession land operated by major timber, palm oil, or pulp companies under licenses from the Indonesian government. Fire clearing is prohibited on this land. “The news spread quickly up to the top levels of the Indonesian government, which launched an investigation and has charged some firms with criminal violations,” Anderson says.