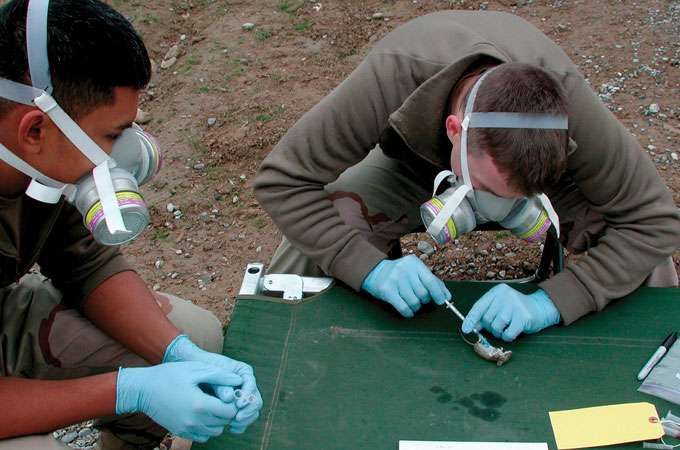 Disease can spread from animals to humans—and back again

In September 2012, a man with pneumonia was admitted to a hospital in Saudi Arabia. His doctors identified the source of his infection as a type of coronavirus new to medicine. These viruses are found around the world in bats, birds, cats, dogs, pigs, mice, horses, whales, and humans. They wreak havoc on the lungs, intestines, liver, and nervous system. Writing in the New England Journal of Medicine, the physician-scientists report that the closest known relatives of the new virus are coronaviruses found in bats, called HKU4 and HKU5. (1) But the virus that infected this man, it turns out, didn’t come from a bat.

In the months following that initial case, there have been 180 confirmed cases of human infection with what is now being called “Middle East Respiratory Syndrome” or MERS. More than half have been fatal. It was clear that MERS could be passed between humans, but where had it come from? Researchers suspected that, like other coronaviruses, MERS was a zoonotic disease—one that is transmissible between animals and humans.

Earlier this year, researchers announced their suspicion that the virus had jumped to humans from camels. (2) Indeed, the Saudi patient who first showed signs of MERS in September 2012 owned four dromedary camels. By looking at preserved specimens from other camels, the researchers discovered that this particular virus, or an extremely similar one, has been circulating among dromedary camels in Saudi Arabia for at least two decades, if not longer.

Did MERS jump from camels to humans only in 2012, or has the virus infected humans for decades but doctors have only recently been able to accurately diagnose it? It’s not clear. “If evidence of human [MERS] infections cannot be detected prior to 2012, we must entertain the possibility that [genetic] mutation facilitated cross-species transmission,” they say.

MERS is not the only virus that can be shared among humans and nonhuman animals. Indeed, a 2001 study found that of 1,415 organisms (viruses, bacteria, fungi, protozoans, and more) known at the time to infect humans, 61 percent were zoonotic. (3)

In January 1996, the Colorado Department of Public Health and Environment confirmed that the Salmonella enteritidis bacterium had infected 39 children, with perhaps more than 300 additional children infected. (Since it usually resolves itself in most patients, milder cases of salmonellosis tend to be underreported; however, it can also include painful abdominal cramps, diarrhea, and fevers.) Yet this outbreak was different because the origin wasn’t undercooked meat. It was the Denver Zoo. In particular, it was one of four individuals in a temporary Komodo dragon exhibit. (4)

After careful analysis, CDC researchers determined that the dragons, one of whom was infected, had stood in fecally contaminated mulch and placed their front paws atop the barriers of their enclosure. Zoo visitors had touched those same barriers and later placed their contaminated hands into their mouths or cross-contaminated their food. Because the reptile house had such finely tuned temperature and humidity, the bacteria could have survived on an exposed surface—such as the railings surrounding the Komodo dragon enclosure—for up to ten months.

Zoonoses can also travel in the other direction, from people to animals. In 2004, for example, CDC researchers discovered that a 31-year-old nurse had transmitted MRSA (methicillin-resistant Staphylococcus aureus) to her pet dog. After having been treated for a MRSA infection, the nurse became infected again, multiple times. After the woman had initially infected her dog, the dog continued to re-infect its owner! (5)

This is a concern not just for human and veterinary health but also for wildlife conservation. In 2006, researchers discovered that at least 5,000 gorillas had died because of Ebola infection. (7) And chimpanzees can become infected with the same pneumonia-inducing respiratory viruses as humans. In 2008, one study found that strains circulating among chimpanzees were highly similar to strains circulating worldwide among humans that year. And not only that: those chimpanzees living closer to ape ecotourism spots and to scientific researchers were more likely to become infected. (8) Unfortunately, there is just no easy way to wash our hands of the issue.