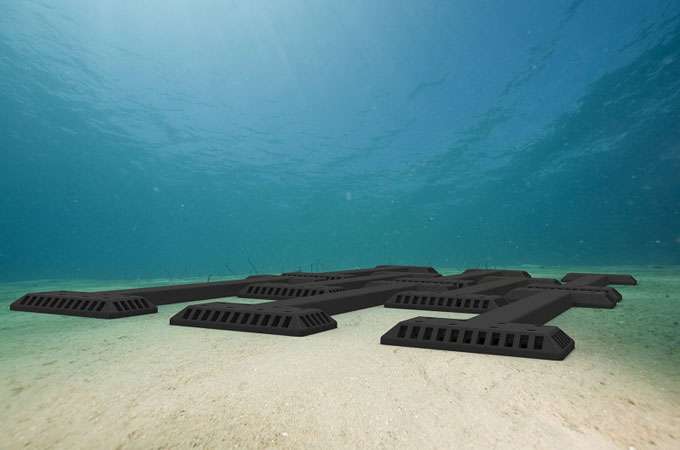 Sit on a beach long enough, and the sun will set, the wind will die down. But the tides will roll in and out, and the waves will crash ceaselessly. The National Renewable Energy Laboratory has estimated that in the U.S. alone, recoverable wave power resources total 1,170 terawatt-hours per year. That’s more than a quarter of the country’s electricity consumption. Add in tidal power, and you get another 300 or so TWh/year. And those big numbers come without the intermittency problems that plague wind and solar energy.

Many are trying, but so far no one has cracked the code for the best design to harness all this power. However, a new technology recently on display at a Department of Energy–backed tech showcase in Washington, D.C., is worth watching.

A wave power technology called M3 Wave dispenses with all the problems that come with buoys or other above- and below-the-surface designs by mooring a simple device to the ocean floor. The device contains two air chambers connected by a wind tunnel of sorts. As a wave passes over the top of the first chamber, the pressure inside increases—forcing air through a passageway to the second chamber. Inside the passageway is a turbine, so the passing air is actually what generates the electricity. As the wave continues on, it raises the pressure inside the second chamber, pushing the air back through the turbine and into the first chamber (the turbine is bidirectional). Another wave, another cycle. Repeat.

The primary selling point of this technology is its simple and small footprint. It doesn’t obstruct ocean views or impact shipping or fishing traffic, and rough seas above don’t endanger the system in any way. The company is selling M3 Wave as expeditionary wave power, meaning it might be brought along on a ship and deployed for things such as disaster relief. The company suggests such a deployment could produce 150 to 500 kilowatts. In August, the system will undergo open-water testing at Camp Rilea, a U.S. National Guard facility in Oregon.

An earlier version of this story appeared on IEEE Spectrum’s Energywise blog. The opinion of the blogger should not be construed as being that of the IEEE.