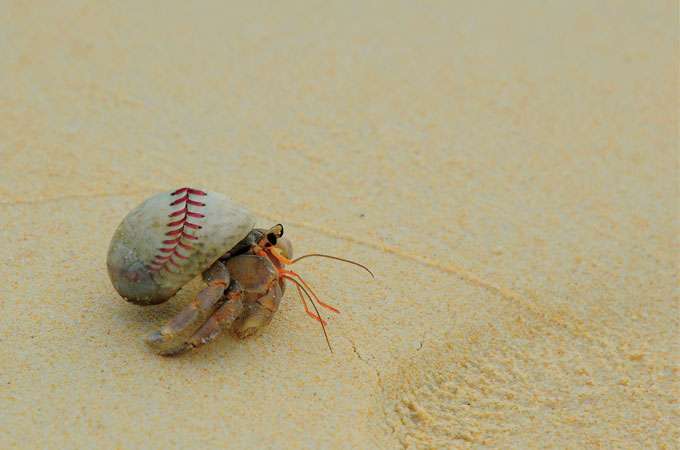 The virtues of ballparks and beaches

My “secret” pleasure in coming to Cape Cod as a nature writer was sneaking out of our idyllic setting in a quaint shack set amid the dunes to watch a baseball game. I’m a fantasy baseball owner, which is a bit like admitting that one used to play Dungeons and Dragons. (I did not, for the record). As for live baseball in my hometown, Laramie has a college summer league team—but nothing compares to the legendary Cape Cod League, enchantingly described in Jim Collins’s The Last Best League. This is pure baseball, as unadulterated as sand, beach grass, and plovers. As I watched the Yarmouth-Dennis Red Sox play the Cotuit Kettleers on a perfect July evening, it occurred to me in a moment of romantic reverie that the virtues of baseball watching are shared with those of beachcombing.

Henry David Thoreau knew the allure of gleaning the refuse deposited by the tides: “The sea, vast and wild as it is, bears thus the waste and wrecks of human art to its remotest shore.” He marveled at the treasures strewn along the Cape—pieces of pirate ships, bright tin snuff boxes, a barnacled bottle half-full of ale. Although beachcombing, like baseball watching, is not regarded as the highest of callings, it touches something deep in the human psyche. Thoreau suggested that humans are scavengers at heart: “Are we not all wreckers contriving that some treasure may be washed up on our beach?” Perhaps today’s lotteries are a degenerate version of this inclination. I say “degenerate” because, as Thoreau noted, beachcombing requires much more skill than merely picking numbers. And watching baseball is much like the former.

Although I’ve spent many more hours in baseball stands than on beaches, both places demand perseverance. To find anything exciting, one has to cultivate awareness and be fully present. It helps to have a point of focus: pitch location, ebony stones, base running, and limpet-drilled shells are all viable. You may not always find what you’re seeking, but the point is to be looking. Let your mind wander too far afield, and you’ll miss the grand slam of beach glass (DJ Stewart, a six-foot, 230-pound slugger from Florida State University, belted a frozen-rope grand slam in the sixth inning).

Much of the pleasure of baseball watching and beachcombing is derived from their social elements. Sure, they can be done alone, but it is so much more enjoyable to share in the wonder of a no-hitter or a stranded jellyfish. Modern life affords few opportunities for meandering conversations with friends, punctuated by double plays or iridescent shells. The beach or the ballpark provides a bucolic backdrop, a soothing ebb and flow that allow for long minutes of just being together, watching.

At the ball game or the coastline, we can practice boredom. Our culture is terrified of being bored or, even worse, being boring. Being bored means having to think our own thoughts, and being boring means saying things that are not erudite or witty. In short, boredom is largely being ourselves—because life is, for the most part, long periods of three-up-and-three-down and yet another chalky-white shell.

The baseball fan and the beachcomber might well think of all the productive things that one could be doing—and then ponder how many problems come from being “productive.” We produce nuclear waste, unwanted children, hateful websites, armored tanks, carbon dioxide, ideological polemics, and plastic bags. Wasting time in the stands or on the sands allows a sanctimonious sense of not wasting resources.

If you watch enough baseball, you might see a perfect game; and if you spend long enough on the beach, you could find a doubloon. Neither is likely. There have been only 23 perfect games in the history of the major leagues, which would be equivalent to a family of four beachcombing every summer day for fifty years to find that coin. And if there’s one thing less fashionable in society than boredom, it’s hope. Economic crises, regional wars, global warming, you name it—all make hopefulness seem so naïve to sophisticated intellectuals. But nobody who stayed home saw Félix Hernández (of the Mariners, rather appropriately) throw a perfect game August 2012 or stumbled across a half-buried doubloon. I envy Cape Cod folks—they have both baseball and beaches to foster their virtues.

Jeffrey Lockwood is the director of the creative writing program at the University of Wyoming, which makes him the first entomologist in history to hold such a post. He has received the Pushcart Prize and a John Burroughs Award for his essays. His most recent book, The Infested Mind: An Exploration of Insects and the Human Psyche, is published by Oxford University Press.