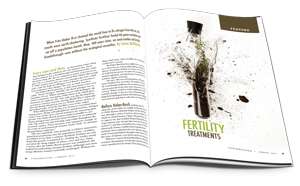 The ability to produce ammonia for fertilizer from atmospheric nitrogen (i.e., the Haber-Bosch process) sparked the Green Revolution and sent crop yields soaring. But we know that this breakthrough came with ecological casualties. James McWilliams addressed the nutrient runoff problem in “Fertility Treatments” (Conservation, Spring 2013).

But another environmental side effect of industrial fertilizer is its huge energy footprint: two percent of the world’s energy is used for the high-temperature, high-pressure business of ammonia production. Now a team of chemists from George Washington University has devised a new method for producing ammonia, one without the heavy CO2 toll. (1)

With Haber-Bosch, hydrogen must be stripped from methane and then combined with nitrogen to produce ammonia, NH3. Taking a different approach, Stuart Licht and colleagues developed an electrochemical process in which nitrogen reacts directly with water to form ammonia—no methane step required. They created a reactor, a “one-pot medium” for ammonia synthesis, containing a molten hydroxide salt electrolyte and an iron oxide nanoparticle catalyst. Piping in steam, nitrogen, and an electric current, the apparatus split water, broke the N2 bonds, and reassembled them into ammonia. The researchers report that they achieved greater than 30 percent efficiency with their process (compared with less than one percent in other, similar attempts).