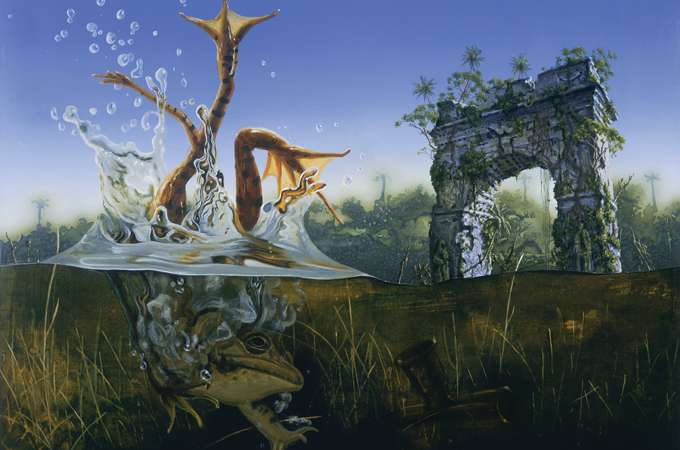 Add a Few Species. Pull Down the Fences. Step Back.

The early twenty-first century is a soul-searching moment for conservation. With each new report of vanishing species and dwindling biodiversity, the last century’s great successes grow distant. Fundamental ideals and assumptions, in particular our cherished notions of wilderness, often feel ill-fitted to a crowded planet of more than 7 billion people.

There are more stories of loss than of hope—and a sense that something new is needed. Perhaps that something is Feral: Rewilding the Land, the Sea, and Human Life, George Monbiot’s deep-throated paean to nature’s joys, resilience, and great still-remaining possibilities. 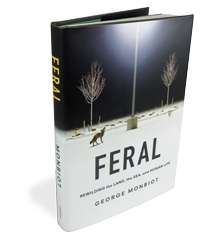 Feral, released last year in the U.K. and now arriving on North American shores, arose from Monbiot’s own soul-searching. A zoologist-turned-investigative-journalist, his Wikipedia biography includes beatings by military police, land-squatting showdowns in London, and a near-death brush with malaria contracted while living among East African nomads. Monbiot writes that, as his firebrand youth turned to middle age, with the confinements of home renovation and resort vacations, he experienced “ecological boredom.”

Monbiot felt disconnected from nature. At the same time, he was unsure how to re-engage. Environmentalism taught him what not to do—damage, pollute, waste—but offered few positive visions. “We know what we are against,” writes Monbiot. “Now we must explain what we are for.”

His words resonate with what’s sometimes called “new conservation,” best known from the writings of The Nature Conservancy head scientist Peter Kareiva and author Emma Marris. They’ve called for a more human-friendly, forward-looking approach to conservation—one less fixated on often arbitrary and unattainable visions of pristine wilderness and more focused on supporting sustainable development and convincing big business of ecology’s utilitarian values. Sometimes absent from the suggestions, though, is a certain vitality.

Ecosystem services and working landscapes are worthy goals, but where’s the inspiration—or what Monbiot calls “that high, wild note of exultation”? For him, it’s in wildness, a sense of communion with oystercatchers and boar, and the jostling of flowers. It’s also in our ecological history—what and who lived where we are now until just a few thousand years ago.

Here, Monbiot veers from the new conservation in a subtle, fundamental way. In his own U.K., what passes for pristine is, in fact, often blasted. Heath-covered Cambrian mountain slopes, widely considered the great wilderness of Wales, were flayed by centuries of sheep grazing. Their bare scrim of life is now perceived, somehow, as a bounty. Ditto the North Sea, where fish populations of a century ago, already ravaged by overfishing, are defined as a target for presumably recovered stocks.

If conservation elsewhere isn’t always so myopic, shifted baselines are universal. “The state of nature is a state of almost inconceivable abundance,” Monbiot writes. “Ours is a dwarf and remnant fauna, and as its size and abundance decline, so do our expectations, imperceptibly eroding to match the limitations of the present.”

The book threatens to become yet another narrative of loss, but it never ventures far in that direction. Records of six-mile-long fish shoals and fossil footprints of vanished cranes are not laments. They are manna for imagining what life’s resiliency still makes possible. Depleted regions may again teem with wildlife, and in many places—including rewilded patches of Cambria and central Europe—they already are. “Rewilding offers the hope of a raucous summer,” he exults.

An ever-evolving notion, rewilding comes in many forms. It includes releasing captive animals into the wild, as with beavers in Wales, where they once created landscapes speckled with ponds and wetlands. Or rewilding can be more ambitious, restoring suites of once-present plants and animals to ecosystems large and small. Oostvaardersplassen, the Netherlands’ Pleistocene-styled park, is roughly the size of Manhattan. As a strategy, rewilding is formulated by contemporary conservation biology in terms of “cores, corridors, and carnivores.”

Monbiot’s rewilding encompasses these, but with differences. He emphasizes the richness of ecological interactions, the flow of energy and nutrients across time and form, and also—crucially—the essence of wildness itself. “Rewilding, to me, is about resisting the urge to control nature and allowing it to find its own way,” Monbiot writes. “The ecosystems that result are best described not as wilderness, but self-willed.”

Add a few species, pull down the fences, step back: this is not a fussy sort of conservation, then, bearing lists of favored species and blacklists of invasives, struggling to produce a historical snapshot. The past is inspiration, not blueprint. Neither is it a domineering conservation, managing nature to meet our demands. Services might result, but they’re not the point. The ethos is not of human primacy, but a muscular, can-do humility. Things will fix themselves if we let them.

Between the ideal and the reality, however, falls the shadow. In Feral, Monbiot profiles two men: Ritchie Tassell, a forester rewilding the Cambrian heath, and Welsh sheep farmer Dafydd Morris-Jones. Tassell’s vision resonates with the author, yet Monbiot deeply admires and respects Morris-Jones, whose family has lived in the same Cambrian mountainside home since the nineteenth century. Morris-Jones weighs sheep by eye and loves the land; he also sees rewilding as a threat to his livelihood and community. There’s no room in the forest for farmers.

The idea of pushing people like Morris-Jones aside is “intolerable,” writes Monbiot, an avowed progressive and indigenous-rights activist. He wrestles with the tension. One way to ease it, he believes, is reforming British agricultural policies that are now unproductive, destructive, and expensive. They subsidize landowners who barely work their land but are required, as a condition of receiving subsidies, to prevent wild nature from returning to it. Fix those policies, and there’s space for both farmer and rewilder. Of course, differences won’t always be so easily reconciled, but the principle is universal. If rewilding is to happen, it must be the people’s choice—an act of democracy, not conservation fiat.

For people to choose nature, though, they must also love it: not an ecosystem service nor some abstraction of biodiversity (a word that, blissfully, appears rarely in Feral) but the living, breathing experience. Monbiot’s own love, and his eloquence in expressing it, makes Feral not only interesting but a pleasure to read.

A sponge-covered king crab pried from the seabed “bulged with the suggestion of muscle like a Roman suit of armour.” Chickadees sing in hills “patched with the small dark shadows of cloudlets,” and oaks “put out embryo leaves as minutely serrated as mouse paws.” Monbiot’s prose incandesces with detail.

This is what conservation is for: beauty, richness, vibrancy. Life. We’ll never recover all that was lost, but that’s okay. What matters is the celebration and journey of revival. To rewild is to know where we are, learn its history, and ask: Could there be more? Can I help? These questions belong in backyards and roadsides, mountains and seas. It’s no longer conservation, but revitalization.

Brandon Keim is a freelance journalist specializing in science, nature, and technology. His work has appeared in Wired, Nautilus, and Aeon. He lives in Brooklyn.