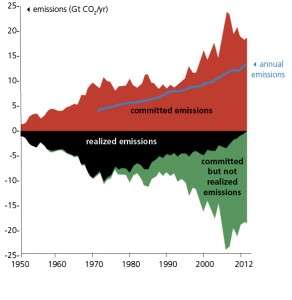 We’re used to hearing about how much CO2 is emitted from power plants each year, but a new paper argues that this sort of accounting misses the big picture. By focusing on “commitment accounting,” researchers calculated the total amount of future emissions expected from all existing power plants over their lifetimes. Instead of measuring actual yearly CO2 emissions, they allocate a plant’s total expected emissions to the year it’s built. And the trajectory isn’t good.

Globally, more new coal plants were built in the past decade than in any previous decade, and committed emissions are growing at a rate of four percent each year. The authors note, however, that “committed” does not mean “inevitable.” With power plant retrofits, carbon capture, and an increase in renewable sources, we won’t have to take such a huge chunk out of our remaining carbon budget.